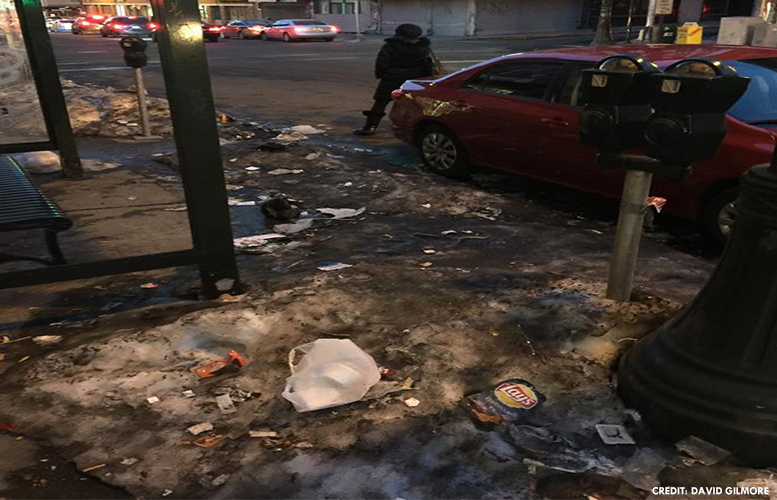 Ojeda said the city launched a massive effort to clean-up city streets as thawing snow left behind awful heaps of garbage. “Right now we have all our crews out cleaning up our city,” said Ojeda. “We’re targeting the whole city.”

“Main Street was much better today,” said remarked city activist David Gilmore. Gilmore has been posting pictures of large piles of trash on city streets during the past week. He has also took to the podium during multiple council sessions to complain about the trash that blanket just about every city street.

Besides targeting city streets, Ojeda said the city has also deployed crews in parks. He said five crews, made up of three to four public works employees, have been deployed to city parks to clean-up.

City is also putting grubby homeowners on notice. “Homeowners who don’t clean-up the front of their properties will receive a notification,” said Ojeda. He said those who do not keep their properties clean after the notice will face tickets.

“Friendly reminder to homeowners is to keep their property clean and well maintained,” said Ojeda.

Mayor Jose “Joey” Torres said the city is also re-instituting the can-men program in busy commercial zones to ensure those areas are clean. The can-man usually pushes a garbage can picking up debris and litter that’s on the ground, said Torres.

“That’s a program we used to have years ago for the commercial areas,” said Ojeda. He said men are being posted in commercial areas to keep the areas and the sidewalk clean. Can-men have already taken to the street in the city’s Downtown Commercial Business District.

Torres said the city’s sweepers were not operating at point, but that’s been taken care of. Ojeda said all city sweepers are back online and are out there sweeping the streets.

The director said the city began the clean-up effort last week and it’s continuing. He said in April there will be Clean Communities efforts to utilize volunteers to target certain areas.

“Once it starts to get cleaned up, I think you’ll see less people inclined to litter when it’s cleaner because if it’s already dirty who cares,” said Gilmore.