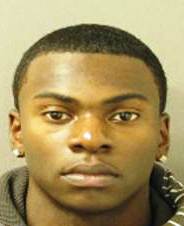 The city’s police department is seeking public assistance to locate a 21-year-old man charged with attempted murder in connection with a February shooting incident on Vreeland Avenue that left a 20-year-old man wounded in the back.

City resident Daquonne Mason (pictured) was identified as the main actor in the February 25th, 2015 shooting incident outside a grocery store on Vreeland and 19th Avenues following an investigation by detectives Francisco Brito, Jason English, and Richard Martinez.

“The skills and talent of the men and women are by far the best in the nation,” said police director Jerry Speziale. He praised the abilities and courage of the city’s police force in investigating violent crimes.

“This should be a message that violent crime will not be tolerated in Paterson,” said Speziale.

Police have charged Mason with attempted murder and weapon possession. He is being sought by several law enforcement agencies including the U.S. Marshal’s Fugitive Task Force, said police.

“There is a zero tolerance and regardless of where you go, whether it be over at county, state line or across the ocean,” said Speziale. “We will reach out and grab you and bring you back to justice.”

Anyone with information about Mason’s whereabouts is being asked to contact detective Francisco Brito of the Ceasefire Unit at 973-321-1342.