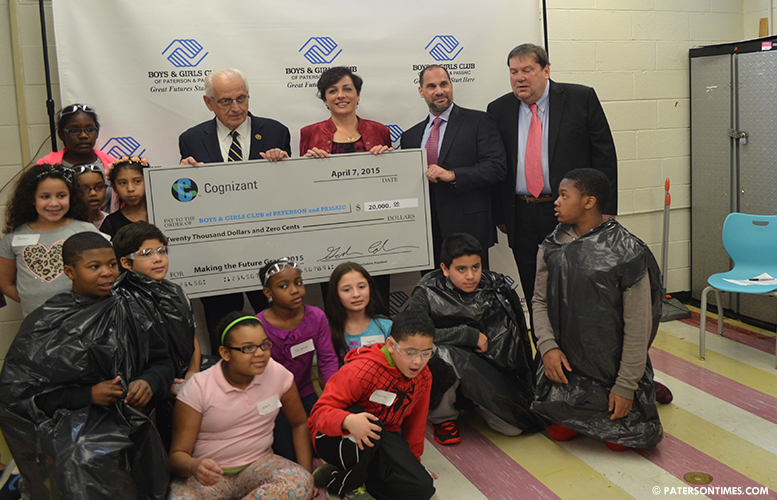 The Boys and Girls Club of Paterson and Passaic is expanding its STEM program that has been exposing youngsters from both cities to the hard sciences through experiments and projects.

“We believe strongly that by inspiring the next generation of makers we can create brighter futures in our communities, brighter futures in our state, and our country,” said Schwartz, speaking in front of more than a dozen young people at the club’s 21st Avenue location. He said last year, the company made a commitment to triple the size of its makers program by 2017.

The grant will enable 60 youngsters to get involved in the science, technology, engineering, and mathematics (STEM) program, said Schwartz. Worden said the program has also received $20,000 from PSEG and $5,000 from St. Louis, Missouri-based Express Scripts.

The largest source of funding for the expansion comes from the federal government through a $75,000 community development block grant (CDBG) grant that was channeled through the city’s community development department. That grant will help turn a minimalistic room inside the club into a science lab.

Pascrell said top ten of the fastest growing occupations are in science and technology. “To prepare our kids for the future is one of the most important jobs we have,” said Pascrell. He praised the club for exposing young people to the practical side of STEM.

A 7th grader at School 13 Ramiz Davis said he comes to the club every day after school. With school closed for spring recess, Davis was at the club building a light bulb. He said the light bulb project happens to be his favorite out of three other projects the students have completed so far.

Davis is one of 120 3-8th grade students served by the do-it-yourself (DIY) STEM program. “It’s an introduction to STEM concepts through hands-on learning,” said Worden describing the program.

She said students have built bridges out of popsicle sticks that had to hold 20 pounds. “They gave us 200 popsicle sticks and we had to make a sturdy bridge that could hold three ten pound dumbbells,” said Davis.

Davis said he and other students worked in groups to see which team could build the strongest bridge. The do-it-yourself program is a just one portion of the STEM program, said Worden. She said this summer the club will have a waterbotics program which will have students building a swimming robot that can go on missions.

“The first mission they have to do is go from one side of the kiddie pool to the other and pick up a drowning swimmer which is a ping-pong ball,” said Worden. The program’s goal is to get youngsters interested in science, technology, engineering, and mathematics early on so that they enter college and graduate college to become scientists, engineers, and mathematicians.

“One these kids could become the next Elon Musk,” said Yusuf Rimawi, STEM director for the club. “It all starts here.”

Corrections: An earlier version of this story stated Steven Schwartz is the company’s vice-president, he is in fact executive vice-president of Cognizant. Additionally, the article stated Cognizant would triple the amount of funding to non-profit, when in fact, it will triple the size of its makers program by 2017 to serve more children.

An initial version of this story stated that $250,000 CDBG grant would be used to create a science lab, when in fact, $75,000 will be used. Over the course of three years the club received $250,000 in federal grant money through Passaic City and Paterson.