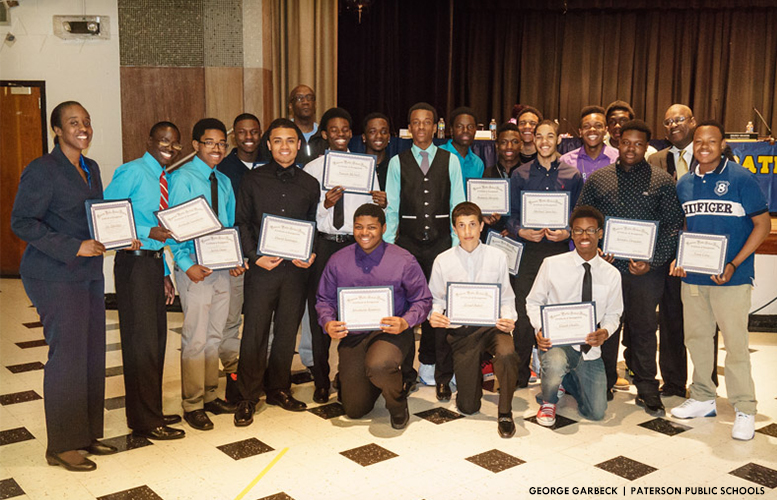 Education officials recognized 69 student athletes and a basketball coach during a ceremony on Wednesday evening for various sports accomplishments. The district recognized track and field athletes and boys and girls basketball stars.

“You clearly demonstrate leadership in your respective areas and that makes us all very proud,” said state-appointed district superintendent Donnie Evans praising all of the students. “It tells the world not only do we have talented students and talented adults preparing those young people for their futures, but it also says we are realizing our vision for becoming not a leader but the leader in educating New Jersey’s urban youth.”

One of those talented adults preparing city students is James Ring, basketball coach and mathematics teacher, who was recognized for having received the Edgar Cartotto basketball award from the North Jersey Board of Approved Basketball Officials.  Ring is the first high school coach to receive the award after 1,000 board members, basketball officials, voted to bestow the recognition, said officials.

The award is named after Cartotto, a former English and Journalism teacher at John F. Kennedy High School and college basketball referee, who served as the chairman of Education and Visualization Committee at the International Association of Approved Basketball Officials (IAABO).

A number of the 69 students have or are on the path towards obtaining full scholarships to respected universities. School board members praised the students, who have managed to capture success not only in the fields, but also in the classroom.

“If we work hard and we work together, and we make sure to put our best foot forward, I believe our children can be the very best,” said Lilisa Mimms, school board member. She pointed out a number of athletes who had 4.0, 3.6, and 3.5 grade-point-averages (GPA).

“They are students first before they are athletes. The way they’ve been able to bring the two together is something to be recognized,” said Manny Martinez, school board member.

A full list of students who were recognized can be found here.