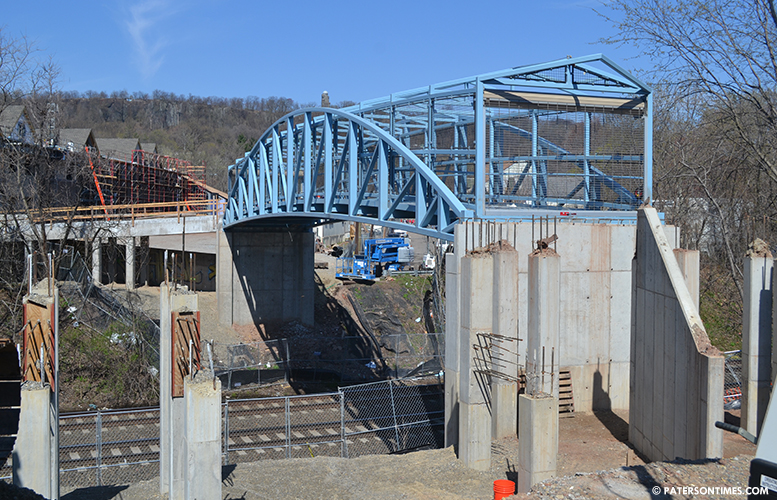 The promised bridge that connects two sections of South Paterson allowing students to quickly access the soon-to-be-completed Hazel-Marshall school without having to go around the train tracks was placed early Saturday morning.

The bridge over the New Jersey Transit train route was placed between 2 a.m. and 5 a.m. on Saturday by workers from Ernest Bock & Sons, Philadelphia-based company that received a $29.3 million contract to build the school. Presently, the bridge starts from the school and appears likely to connect to Paxton Street on the other side of the tracks, but that connection has yet to be made.

Students served by the school located in the corner of Marshall and Hazel Streets will utilize the bridge to and from the school which has already been named after deceased Arab-American leader Hani Awadallah.

With 108,000 square-feet of space, the school is designed to educated approximately 650 students in kindergarten through eighth grade. It will include specialized instruction classrooms, labs, a media center, a gymnasium, a cafeteria, a community room, four kindergarten classrooms, and 23 general classrooms.

Officials from the New Jersey School Development Authority (SDA), the school district, and city government broke ground on the new school in May of last year. Later that year, officials held a beam signing ceremony with students who signed their name on a steel beam to see it become a permanent part of the structure.

The construction of the new school has been mired by delays. Education advocates have said the school should have been built 10 years ago. They say it was promised to city students more than 14 years ago. The $2 million pedestrian bridge over the train tracks further delayed construction on the school, city officials said.

Those delays are behind though. The school will be completed and ready for students by the 2016-17 academic year. “The project is still on schedule for a September 2016 occupancy,” said Edythe Maier, spokesperson for the SDA, on Friday afternoon.