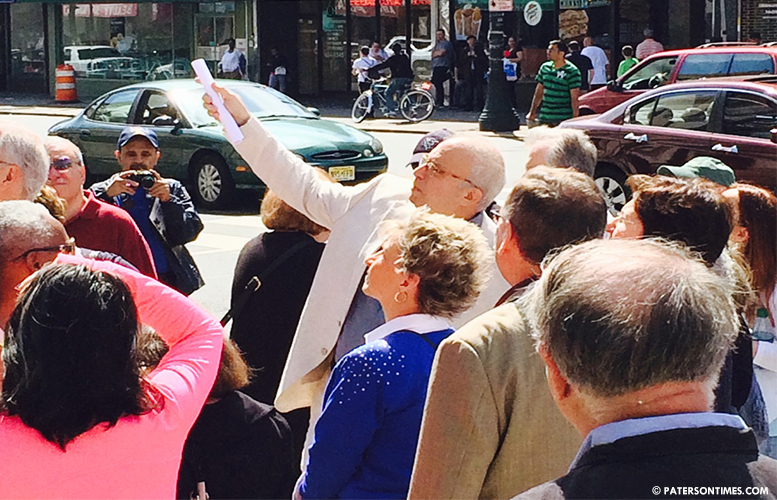 On a balmy Saturday morning, a group of people from many different walks of life assembled to enjoy a tour of Paterson’s Downtown Commercial Historic District. The excursion planned by the city’s Historic Preservation Commission focused on the impressive architectural achievements of Fred Wesley Wentworth, an architect who up until recently, had been largely unrecognized despite his sizable contribution to the city.

The tour, guided by self-proclaimed ‘Paterson Nut’ Richard Polton (pictured in summer suit), commenced with a detailed account of Paterson’s history: Its rise as a prominent manufacturing city, the fire of 1902 which levelled a sizable portion of the city, and the subsequent surge of new construction. Mr. Polton, a studied architect, member of the Hamilton Partnership for Paterson, and prominent associate with the Jewish Historical Society of New Jersey, described how his fascination of Mr. Wentworth began when he stumbled upon a book of his on eBay several years ago.

Intrigued, Mr. Polton dug a little deeper and discovered the profound contribution Mr. Wentworth made to Paterson. Mr. Polton’s rich narrative revealed that the architect had designed the schools generations of Patersonians attended, the social institutes many of them frequented, and the hospitals were countless residents, Mr. Polton included, were born.

He was also responsible for the designs of the Gerstley Building, the First National Bank, the Charles W. Elbow Building, the original Masonic Temple, and the original YMCA and YWCA buildings. While some of Mr. Wentworth’s buildings no longer serve the community, many are well preserved and stand testament to the extent of his work.

To supplement the boisterous guide’s account of Paterson’s past the Director of the Historic Preservation Commission, Mr. Gianfranco Archimede, provided choice anecdotes of the Downtown Commercial Historic District. He proved to be a wealth of knowledge as well, and his devotion to the City was palpable.

This tour was one of many excursions organized by Mr. Archimede and his Commission in an effort to rehabilitate Paterson’s historic landmarks and maintain the city’s impressive past. In the coming months, there will be a tour of Paterson’s Historic Eastside Park, and a historic baseball game at Paterson’s Westside Park which will be played by 19th century rules and regulations, among others.

Further information concerning these events can be found on the City of Paterson’s website under the Historic Preservation Commission’s page.