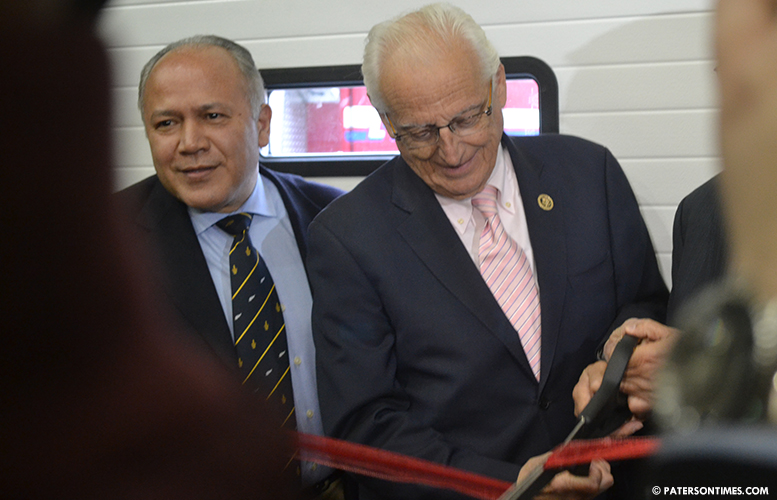 Officials from all levels of government held a ribbon cutting ceremony unveiling a new firehouse on McBride Avenue on Monday afternoon to house the displaced Fire Engine Seven which formerly operated out of the obsolete Grand Street firehouse.

The 27,000-square-foot fire station at 300 McBride Avenue cost approximately $7.9 million build, said fire chief Michael Postorino. Much of the funding came from the federal government with a $4.5 million federal economic recovery act grant in 2010. The city bonded an additional $3.2 million for the facility.

The new firehouse on McBride Avenue.

Postorino said the new building will serve as the central headquarter for the city’s fire department hosting all administrative offices in one location. He said since 1989 there has not been a centralized fire headquarter. Administrative functions were scattered throughout the city at four different firehouses, said the chief. With this new building much of it will be centralized and residents will be able to obtain services like fire inspection, permits, and arson investigations at one location, he said.

“This is a substantial victory for all of us,” said congressman Bill Pascrell as over a hundred firefighters standing inside the new firehouse clapped in support. He said the new fire house will help protect city residents for the next hundred years.

Pascrell acknowledged late senator and city native Frank Lautenberg who also fought alongside him and United States senator Bob Menendez for the funds. “This new firehouse not only will keep the community safe and protect lives, but its construction employed local workers at a time when unemployment was at its highest,” said Menendez.

He said the new facility is also good news for the six surrounding communities that rely on the city for ambulance services. Torres said the city’s fire department is better prepared to respond to emergencies. “We now have everything we need for a fast, coordinated response, including response to natural disaster and terrorist threats,” said the mayor.

Torres thanked federal officials for their assistance. He handed out miniature firetrucks to Pascrell and Menendez. State senator Nellie Pou and assemblywoman Shavonda Sumter were also present at the ceremony.

The mayor held a moment of silence for Lautenberg. He also named Ladder 2 after the Parkin family which provided firemen to the city for three generations. Joe Parkin Sr. was one of the founding members of the city’s ambulance division. “We appreciate your service to our city and our country,” said councilman Andre Sayegh referring to the Parkins. “We owe a debt of gratitude.”

The firehouse was in the making since 2006, said Postorino. One firefighter quipped the Great Wall of China was built faster than the McBride Avenue firehouse that sits next to Pennington Park. It took eight years to build the firehouse, said the fireman.

“It’s been a long time coming,” said Postorino. He thanked federal officials for making assisting the city in receiving the 5th largest SCG grant in the country.

“They knew we needed this facility. We wouldn’t know how to build it without them,” said the chief. “We needed this and we’re so thankful we got it.”

The new building replaces 100-year-old home of Fire Engine Seven on Grand Street which will be turned into a police substation.