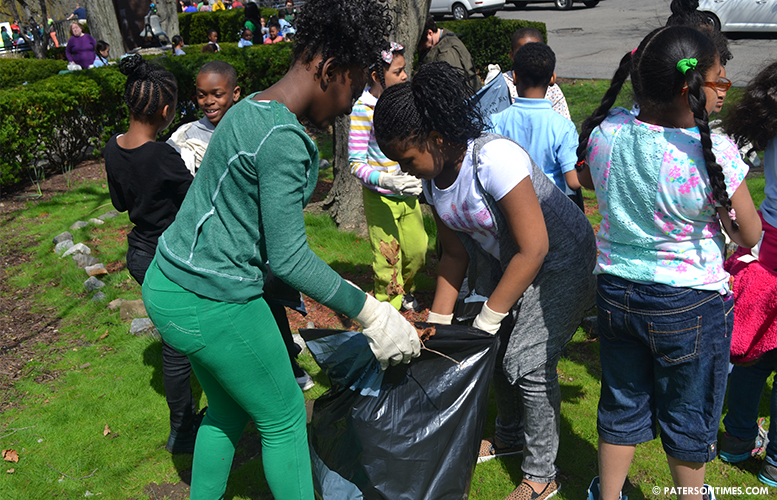 “We’re helping mother nature,” said Everald McGowan, 5th Grader from Napier Academy, as he and classmates collected their second bag of trash and litter from Overlook Park off the McBride Avenue extension.

McGowan was one of more than 300 young people cleaning up the park. Park ranger Ilyse Goldman said more youngsters are expected to arrive on the scene.

“This gets larger every single year,” said park superintendent Darren Boch. Most of the students are from grades 3-9, he said.

McGowan’s classmates Troy and Trey Milton, twins, said it took them 10 minutes to collect the single bag of garbage, but said those minutes could have been saved had people avoided littering and taken few seconds to appropriately discard bottles and cans.

“I go to the recycling bin and place it there,” said Troy Milton, when asked how he gets rid of bottles. When a recycling can is nowhere to be found, one has to be created using a bag, he said. Their teacher Elaine Silverstein is hoping the clean-up will serve as a lesson to not litter and throw trash on city parks and streets.

“[I hope] that they learn not to litter. I hope it translates to the school and to the community,” said Silverstein. “They are learning how to keep their community clean,” said another teacher Marcella Simadiris.

This year’s annual clean-up sponsored by the Passaic Valley Sewerage Commission (PVSC) also included a hovercraft to clean up the tricky areas at the bottom of the 77 feet water fall. Brian Davenport, river restoration manager for the PVSC, revved-up the craft to hunt for debris and garbage that’s in tough to reach areas under the falls.

Though the commission usually shuts down the falls to clean up its top, today that wasn’t a possibility due to the recent rainfall that resulted in more than expected water levels, said Hollie Gilroy, spokesperson for the PVSC.

The event did not just focus on ridding the park of trash, there were educational activity tables focused on teaching students to better manage the earth’s resources. A group of students from Panther Academy had a table showing the dearth of fresh water on the planet.

“When the population keeps growing, we’re reducing so much water,” said 10th grader Ivette Biascochea. She pointed to a droplet of water, signifying the of the earth’s actual freshwater supplies, out of a large cylindrical beaker that represented the planet’s total water supply. “When you look at it that’s how much you have to drink,” she said pointing to a droplet.

About 2.5-percent of water on earth can be called freshwater majority of which is in ice caps and underground aquifers, according to the United States Geological Survey. Biascochea pointed out that a large quantity of it is trapped in glaciers.

They bring water bottles, drink a little of it, and throw out the rest, said Kassandra Fred, 10th grader, who along with Zynief Davis undertook the project, citing habits of wasteful students.

“I think it was shocking for them to see how little fresh water we have,” said Detra DeNully, 2nd Grade teacher from the Paterson Community Charter School. She had about 15 of her students present at the table, some of whom could not believe the small amount of fresh water that exists on earth.

A nearby activity table hosted by Kassandra Archer of the River Institute at Montclair State University showed, using a enviroscape watershed, the impact litter, fertilizer, and other pollutants have on a watershed.

“No matter where you are and whatever you do on the land has an impact on the water system,” she said. “Even though it’s happening they can mitigate the issue,” Archer said referring to the army of youngsters busied themselves cleaning.