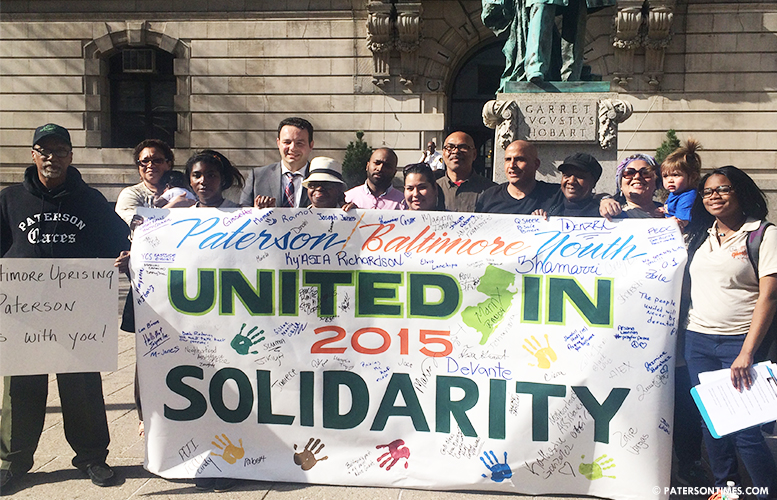 Chants of “Being black is not a crime” and “Same story every time” could be heard outside of Paterson city hall on Wednesday afternoon as a group of locals gathered to demonstrate in solidarity with the protesters in Baltimore, Maryland.

“We’re out here today in solidarity with what’s going on in Baltimore and what’s been going on in Ferguson, New York City, and Detroit, in Long Beach, all over the place,” said Rebecca Fernandez, organizer for the Parent Education Organizing Council (PEOC), referring to nationwide protests against police brutality.

With every news story of another African-American killed at the hand of police, there is a genuine fear black men are unsafe when interacting with police. “I have family members who I think are at risk because I have black men in my family,” said Rosie Grant, executive director of the Paterson Education Fund.

One such news story hit the wires on April 19th, when a 25-year-old Freddie Gray died from spine injuries sustained while in Baltimore police custody. A week long protest followed.

Gray was in a rundown neighborhood plagued by violence and known for drug transactions when he “fled unprovoked” from police, but three policer officers chased, arrested, and charged him with having a switchblade in his possession after finding automatic blade in his pocket.

The six officers involved in the incident were suspended.

“We’re here to raise awareness for the situation that happened in Baltimore. The tragic death of Freddie Grey where six cops brutalized him, attacked him, and did not seek him medical care. He then eventually died from his injuries,” said Zellie Imani, an organizer with NJ Shut It Down, a coalition of community activists.

Just hours before the rally two people were shot in a vehicle near Wrigley’s Park. “People in Paterson need to be outraged about all violence whether it is state violence or community violence because all black lives matter,” added Imani.

In the past weeks the city witnessed the murder of two young people: 15-year-old basketball star Armoni Sexton and 17-year-old Nadjhier Barner.

“Paterson Youth Matters,” read a protest poster, reminder of the two deaths. “I’m supporting the protest because too many of our kids are dying,” said Grant.

“Our youth [are] coming into line with the city of Baltimore’s youth in terms of how most youth in urban cities around the country are suffering,” said David Thompson of Halls That Inspire.

Thompson said the solidarity rally teaches the city’s youth the power of protest to better their community. More than half-dozen young people were present at the demonstration organized by the PEOC in conjunction with several city groups like the Paterson Education Fund, NJ Shut It Down, and Halls That Inspire.

Although the demonstrations in Baltimore turned violent there was no chance of that happening in front of city hall with police standing nearby keeping watch.

“We’re showing the community that people can mobilize rallies as long as the protests are peaceful they have the right to do this,” said Captain John Robb of the Special Operations Unit. “We’re not Baltimore. We are not like these other communities that have these issues.”

Some called for more police presence in the city to curb violence. Sayegh called for the strengthening of the city’s narcotics division and reinstituting of the city’s street crimes unit because much of the violence plaguing city streets stem gangs curving out pieces of the city for illegal drug distribution, a trade fueled by New Jersey’s heroin epidemic.

“We don’t want people to get the impression they’re not safe in our city,” said Sayegh. “Obviously, that’s how a lot of people feel so I’m trying to get the message across that where the problems are is where the police should be.”

“Injustice anywhere is a threat to justice everywhere,” said Grant quoting Martin Luther King Jr. She said it is injustice that prompted the protests in Baltimore.

“This is going to affect us all eventually if something isn’t done,” she said.