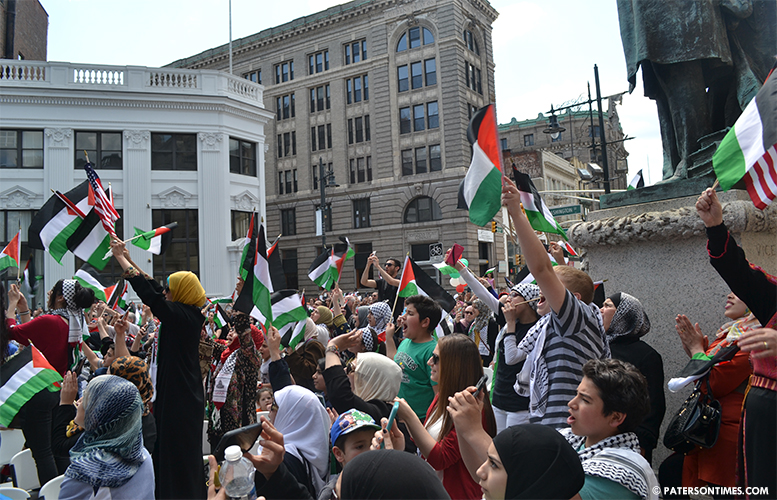 For the third year in a row, the city’s Palestinian-American community celebrated its heritage with a flag raising outside of the city hall on Sunday afternoon.

“Raising the flag at the heart of this city means a lot to us,” said Diab Mustafa, president of the Palestinian American Community Center. “Raising the flag is a recognition of the substantial contribution we’ve been making to this great city.”

Speaking in front of a crowd of roughly 1,000 people, Mustafa said Palestinians began to immigrate to the United States in the late 1800s along with other Arabic-speaking immigrants from the Levant. However, it wasn’t until the 1950s and 1960s, when large number of Palestinians fled the turmoil in their homeland to America, did substantial number of Palestinians arrive in the Silk City.

The city has the largest diaspora of Palestinians in the United States, said mayor Jose “Joey” Torres. “In Paterson it’s an industrious, hardworking community, and has contributed greatly to the city’s economy in progress,” said the mayor referring to the city’s Palestinian-American community.

Torres proclaimed the week of May 3-9 Palestinian-American Heritage Week. He received two presents from Riyad Mansour, ambassador and permanent observer of Palestine to the United Nations. Mansour presented Torres with a medallion that featured the pope, the patriarch of the Eastern Orthodox Church, and Palestinian Authority president Mahmoud Abbas, highlighting religious diversity of the small strip of land that has been the subject of dispute between Muslims, Christians, and Jews.

Torres was also presented with a pictorial history book of Palestine that starts from the invention of the camera in the 1800s, said Mansour.

Mansour proposed a sister city relationship between Paterson and Ramallah, the de facto capital of Palestinian state. He said documents can be signed in either here or in Palestine or in both places.

The city has its own Ramallah in South Paterson called Little Ramallah where Palestinian-American businesses power a large portion of the city’s economy bringing ethnic food hunters and Arabs from throughout the Northeast.

The governor of Ramallah Laila Ghannam was present during the flag raising.

Imam Mohammad Qatanani of the Islamic Center of Passaic County said history will remember what happened in Paterson when the local Palestinian community came together to raise their flag over the city hall.

In 2012, the city’s then mayor Jeffery Jones, allowed the Palestinians to hoist their green, white, red, and black flag over the city hall.

“We need to celebrate our heritage day peacefully as any other community in Paterson,” said Khader “Ken” Abuassab, president of the Arab-American Civic Organization, who lobbied city officials for the flag raising.

The organization and the center worked together to put on this afternoon’s event, said Abuassab.

There was a large police presence around city hall as traditional Palestinian music overcame the sound of Market Street traffic and young men performed a distinct dance called the “dabke.”

Abuassab said the police were there to ensure peace.

Mansour, the ambassador, said he would like to see the flag of the Arab revolt hoisted over the United Nations, sometime in the near future. Although a large number of countries around the world recognize the State of Palestine, the United States does not due to its close ties with Israel.

Haytham Younes, who unsuccessfully ran for a city council at-large seat last year, said his family still has keys and deeds to their properties and homes from which they were forced to flee in 1948.

More than 700,000 Palestinians fled or were expelled from the land that later became the State of Israel, according to the United Nations. “We are refugees in our country,” said Qatanani. “We’re suffering because we’re Palestinians.”

“You have to make sure your community remembers their countries. Every community, they raise their flag, they celebrate their heritage, we must do that,” said Younes. He said cultural events like the flag raising expose Palestinian children to their heritage.

“Hopefully one day peace prevails in the Middle East and Palestine and we’ll be able to raise our flag all over Palestine,” said Awni Abuhadba, who served as deputy mayor for eight years under the two previous Torres administrations representing the city’s Arab community.