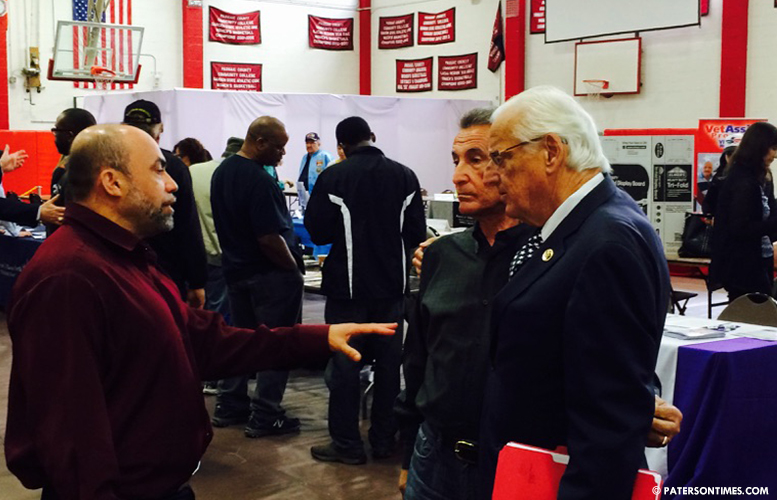 May 1st marked the beginning of Military Awareness Month, a time to appreciate those men and women serving in the armed forces, and to reach out to veterans who are attempting to assimilate back into civilian life.

In honor of this month, U.S. Congressman Bill Pascrell (D-NJ) in partnership with several Passaic County institutions – the Superior Court, the Board of Chosen Freeholders, and the Passaic County Community College – hosted a Veterans Resource Fair on Saturday morning to connect veterans with available resources to address their needs.

The fair, located in the gymnasium of the Passaic County Community College, drew in a healthy crowd of veterans who served in Iraq, Desert Storm, Vietnam, World War II, and the Korean War. The main focus of the fair, according to Passaic County Veteran Officer John Harris, was “To try and get the word out to veterans that there is help for them.”

The gymnasium certainly reflected this sentiment as many groups, such as the Brain Injury Alliance, Branford Hall Career Institute, the Department of Health & Human Services, and Team Red, White & Blue, were present and ready to offer any help they could.

Shortly following the start of the fair, Congressman Bill Pascrell arrived to address the crowd. His tone was characterized by a reassuring frankness that spoke volumes of the congressmen’s commitment to veterans nationwide. Throughout the speech, he asked several individuals to speak about their programs and involvement in the army community, ensuring that everyone was aware of the resources present. Following the address, he fielded questions from the audience with great vigor.

When asked about the sparse attendance of younger veterans, Pascrell said, “Sometimes young guys think they know all the answers, and find that they don’t. Old vets are used to going to find out things, young guys are not.”

He stated that many groups are attempting to facilitate communication specifically with Iraq and Afghanistan war veterans.

The congressman, a military veteran himself, has had a prolific history with veteran and armed forces affairs, as demonstrated through his involvement with the American Recovery and Reinvestment Act, the construction of the first veterans’ outpatient clinic in Passaic County, and the Traumatic Brain Injury Reauthorization Act of 2014, that set up post-service mental diagnostic care for soldiers.

One veteran, Samuel Bosque of the Passaic County Marine Core League, stated “There is no one out there that really believes and gives us veterans a green light to just about any program that comes up. He cares about the veterans and their families, he makes sure that every veteran gets what they’re entitled to.”  Bosque’s feelings adequately summed up the veterans’ opinion of the congressman, as many vied for a word with him following the address.

Various organizations setup tables at the college’s auditorium to help veterans with the resources they may need whether medical assistance, financial guidance, or help to reconnect with their respective communities. There was someone at the table to offer a hand.

The event also served to connect veterans with each other as they engaged in warm and energetic dialogue over issues that impact them in the Passaic County Community College auditorium.