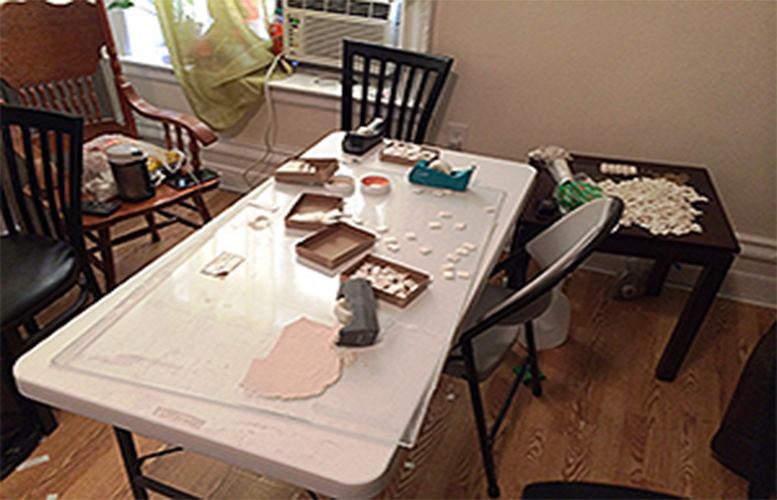 Five people were arrested, $5 million worth of heroin was seized, $115,000 in cash was confiscated, and two guns were recovered in a seven-month long investigation that resulted in the dismantling of a major heroin trafficking network led by a Belmont Avenue man that operated drug packaging mills in the Bronx and Manhattan, according to U.S. Drug Enforcement Administration (DEA).

Authorities said Rosario-Concepcion headed the drug trafficking organization that supplied to dealers in New York City and upstate New York State from two packaging facilities in the Bronx and Washington Heights in Manhattan.

A raid at the Bronx heroin packaging facility occurred at around 11:15 a.m. on Thursday netting the five alleged dealers, authorities said. The facility at 238 West 238th Street, Apt. 25, in the Bronx, was found fully operational and Rosario-Concepcion overseeing production.

Rosario-Concepcion, Rosario-Ortiz, and Almonte were in the mill’s living room.

The network had a heroin holding of $5 million at the time of the raids, authorities said.

Investigators and agents outside of the five-story apartment saw heroin being thrown out of a window during the raid. Abreu-Cristomo and Holguin-Rosario attempted to escape by climbing out of another window to a fire escape.

Holguin-Rosario broke into a neighboring apartment from the fire escape in an unsuccessful flight attempt. Both were arrested.

Bricks of heroin seized at 20 Laurel Hills in Manhattan.

“As a result of these seizures and arrests, lives have been saved,” New York State Police Superintendent Joseph A. D’Amico said.

Abreu-Crisotomo allowed the network to use his apartment stash house for heroin shipments before and after packaging for retail distribution.

Also assisting in the investigation were the Passaic County Prosecutor’s Office, the Narcotics Unit of the Nassau County Police Department, and the DEA’s Long Island District Office.

“As heroin use continues to plague our communities, our collaborative efforts as members of the Strike Force is a great way to fight back to stem the tide of this dangerous and deadly epidemic” Raymond R. Parmer Jr., Special Agent in Charge of HSI New York, said. “By initiating an investigation from the street user and climbing the ladder to the distributor has proven to be a successful method to taking down heroin mills like the ones operated by this drug trafficking organization.”

Authorities tracked down the source of the supply from distributors of heroin glassine distributors in upstate New York that led Rosario-Concepcion’s New York City-based network.

The five men were arraigned in Manhattan Criminal Court on Friday.