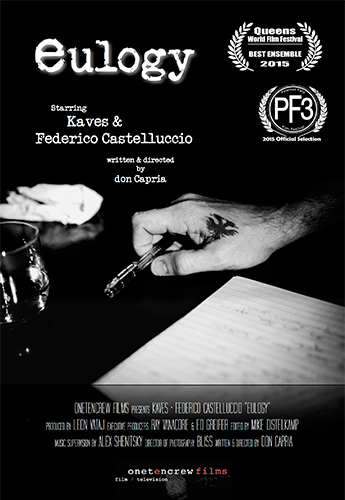 Well-known for playing a mobster on HBO’s Sopranos, Paterson resident Federico Castelluccio stars in the short film “Eulogy” which will be featured at the third annual Paterson Falls Film Festival on June 14.

The film will be screened at 11 a.m. on Sunday, June 14, at the Fabian 8 Cinema at 301 Main Street. The film portrays the bonds of brotherhood and loyalty in a close-knit Albanian community. It follows the story of Zef Celaj played by Brooklyn artist and thespian Michael McLeer also known as Mr. Kaves.

Celaj is serving time for a crime his brother Martin committed. He discovers his brother took his own life, and so he travels home to the Bronx to deliver a eulogy at Martin’s wake.

“We also couldn’t be prouder with the cast, who were all nominated and took home an award for best ensemble at the Queens World Film Festival,” Don Capria, writer and director, said. “We are excited to see what happens next.”

Capria said the film has made it into few local festival already. It is expected to continue to tour the film festival circuit throughout 2015.

“We are able to get friends and family and those that were involved in filming come out to support the screenings,” Capria said.