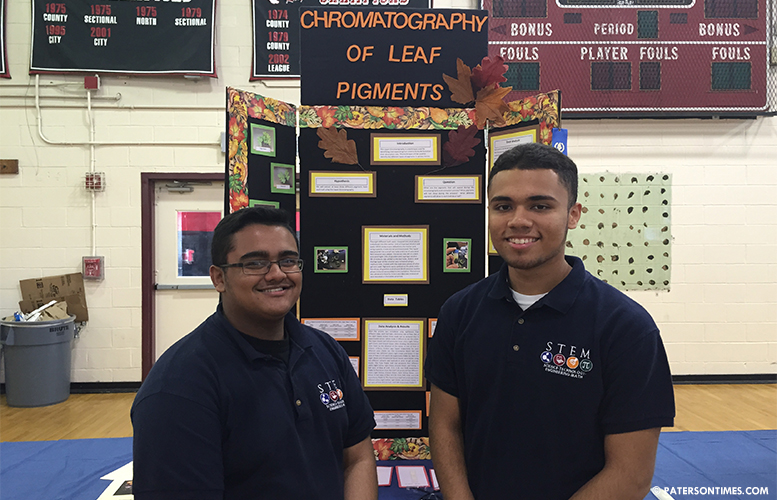 Project display boards filled the gymnasium of the high school where students competed to be the best in their grade level. Two students from John F. Kennedy’s School of Education and Training (SET) Academy secured that distinction by winning first place in 11-12 grade level.

“Chromatography is when you take a substance and extract it to see what pigments there, their colors,” explained Islam. The two students went around campus, collected leaves, and then conducted an experiment to bring out the colors that are often hidden behind chlorophyll, green pigmentation.

“We predicted most of them would be green and yellow,” said Santiago, “but we were surprised.”

Islam said when the green color was broken, purple, yellow, and orange were revealed. Those are the colors that give the leaves their colors in the fall, said Islam.

The fair was not limited to high school students, but included all grade levels from kindergarten all the way to 12th grade. Projects included conductivity of water, effects of video games, and right brain versus left brain.

With so many great projects, judges had to narrow the winners. During the judging process, students were asked two questions. The first being whether or not their experiment addresses or solves an issue the world struggles with today. The second, how could the science projects help decide each student’s future college and career pursuit?

“Once I got them thinking about that, each one was actually able to come up with an answer to that question. And the second one is [because] the mission and vision of the school district is to see students be successful with college and their career,” said Ron Cilente, science teacher.

The students had different outlooks on what they wished to study in college. Not all of them wanted to be scientists. Some wish to one day be psychologists others professional athletes. They are not just preparing for the fields that exist, but also for those that are being created: the jobs of the future, said school officials.

“In order for them to be successful in their current world and in the future, they need to prepare for work that doesn’t exist yet,” said Sarah Sterling-Laldee, acting supervisor of science and science fair coordinator.

Jose Correa, interim executive director at the district’s technology department, worries the United States is being outpaced by other countries in the hard sciences. The Organisation for Economic Co-operation and Development (OECD) ranked the U.S. 27th in mathematics and 20th in science out of a list of 34 rich countries.

“We have to outsource a lot of the really high paying career positions to other countries because the United States hasn’t been preparing them. So I’m here speaking to different students,” said Correa. “I spoke to some of the girls in School No. 24, and I’m encouraging them to continue to get into the sciences. Specifically with minority students and specifically with Latino and African American students I think it’s really important.”

Prior to the fair students went head to head against each other in their designated schools for first, second, and third place. After their placement, coordinators of individual schools allow those students to participate in the district fair.

“Even at an individual school level there’s first, second, and third place winners, but when attending a larger scaled Science Fair, students are able to actually have a competitive edge amongst peers in the same grade level,” said Joanna Tsimpedes, supervisor of mathematics.

Three fifth graders from School 5 Samiha Ahmed, Mahjabin Chowdhury, and Ayleen Rodriquez showcased conductivity in which they experimented with water and soluble substances like salt, epsom salt, and sugar to determine which was best in conducting electricity. The group concluded salt was the better conductor due to the level of ions carrying electrical current through.

Even though the three ladies did not win in the fair, the motto of the district is: “If you fail, try again.”

“The biggest lessons from these science projects is learning that if you fail try again and through those failures you learn more and more about a particular subject matter,” said Patrick T. Cecala, math, science teacher and engineering team coach at School 5.

First place winners by grades are below: