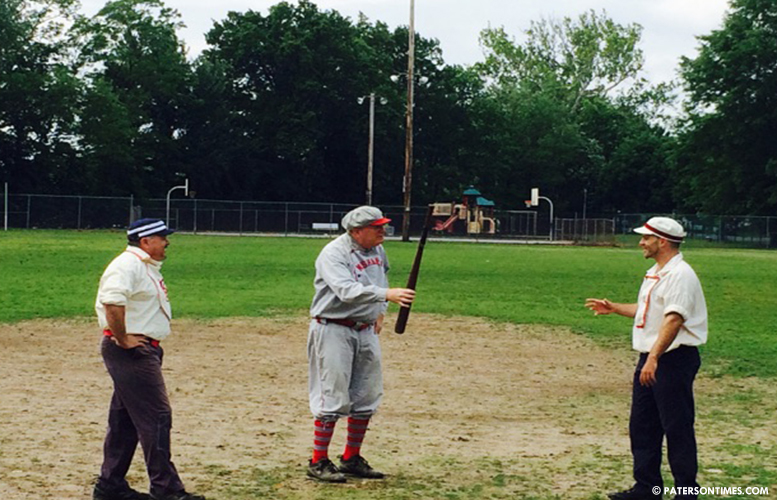 You couldn’t ask for better weather for a baseball game: a lightly overcast sky accompanied by a nice breeze and temperate temperatures. With the crowd eagerly awaiting the start of the game and the players warmed up, the umpire took the field and called for a representative from the Brooklyn Atlantics and the New York Gothams for the bat flip.

If you are not familiar with the teams, or a bat flip, do not fret, as this iteration of America’s pastime is unlike anything that is played today.

Vintage baseball pays homage to the roots of the game by following 19th century regulations such as field size, equipment (bat size, ball, uniforms, etc.), and rules. When the game commenced at Westside Park on Saturday, it was immediately apparent that baseball had once been an entirely different spectacle.

“We are playing by 1864 rules,” said Rafael “Wickets” Garcia, third basemen for the Gothams. “You’ll notice that runners cannot overrun the bag, pitching is done underhand, and a ball caught on the bound is considered an out.”

Ed “Pigtail” Elmore, founder of the re-formed Atlantics team, expounded on this and stated, “Where the ball touches down first determines whether it is fair or foul, it does not have to pass the bases.”

Players on each team, in alignment with tradition, adopt nicknames that they use to refer to each other during the game. These nicknames are given to players by their teammates and are generally crafted from idiosyncrasies they exhibit on the field, general character, physical attributes, or in tribute of a historical baseball figure.

A few of these nicknames include: Charles “Bugs” Klasman, for his habit of keeping his eyes open exceptionally wide during play; Joe “Sleepy” Soria, for his demeanor on the field, and Anthony “Dirty Pirate” Cannino, who gleefully recounted how he attained the title.

“Fans from the opposing team began shouting the name at me while I was on the field and then chanting it when I went up to bat,” said Cannino.

There are many Vintage Baseball Leagues across the country. Elmore described how, “This year [the Brooklyn Atlantics] are going to Milwaukee for a tournament. We went to Michigan last year, Ohio a couple times, Canada, we’ve played teams down in Delaware and Maryland, and we’ve been down as far as North Carolina.”

One of the more incredible aspect of the individuals who enjoy Vintage baseball is not their commitment to travel far and wide, but that their shared love of the game has helped form friendships between people that come from all walks of life.

Vincent “Tuna” Aurora, of the Atlantics became involved in the vintage baseball after second baseman Greg “Hawk” Dengel, told him about the game played with no gloves.  “He told me there are no gloves, and I was really intrigued,” said Aurora. “I went down [to a game] and I fell in love right away. I watched for a year before I was voted onto the team. This will be my seventh year.”

Aurora and Dengel were at the time were doing community theater together. Dean “Dreambucket” Emma, also of the Atlantics, began playing when a principal at the school he worked had told him about a good friend who played vintage baseball and was organizing a faculty charity game. “So I played and the captain from the other team asked to speak with me about playing more,” said Emma. “I participated in a home game with them and feel in love with it and cleared my weekend schedule to travel and have a blast with these guys.”

Spectators of the event included a mix of Patersonians, the Mayor (who threw the first pitch), Councilmen Andre Sayegh, and family and friends of the players. Leah Klasman, daughter of the captain of the Gothams clearly enjoyed the game immensely, saying: “I have been attending the games for a long time, and it is one of the coolest things I have ever seen.”

The game was organized through a coordinated effort from Paterson’s Historic Commission, the Department of Public Works, and the Department of Parks and Recreations. “Most of the credit goes to Kelly Ruffel,” said Gianfranco Archimede, director of historic preservation. “Kelly has been working for the Historic Preservation Commission as a specialist for three years now and she knew the league from a historic site that she was working for before called Ringwood Manor State Park. These guys [the Brooklyn Atlantics and New York Gothams] play regularly there, so she knew them.”

Archimede said she told she was working in Paterson and they wanted to play at the stadium. “So we said to them when the time is right we definitely want you to come,” said Archimede. “We think they’ll become a regular part at what goes on at Hinchliffe Stadium.”