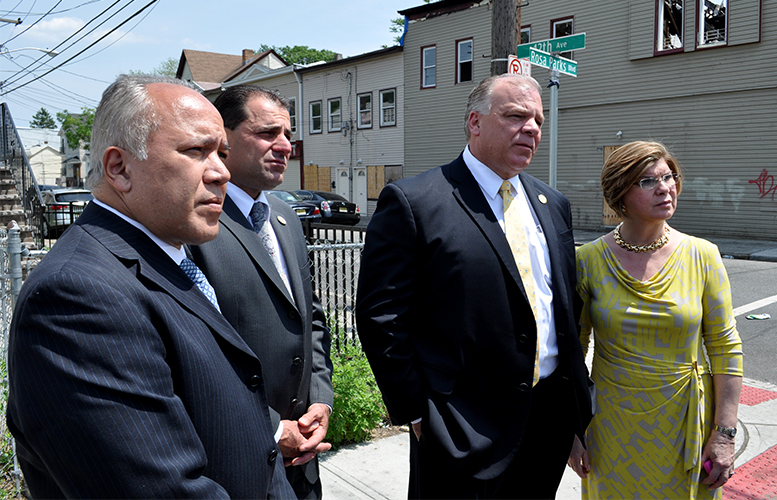 One bill will reduce the population threshold of first-class city to grant the Silk City more power to regulate liquor license holders. Another allows the city to create a land bank program to hold abandoned properties and sell to spark redevelopment.

A third will allow law enforcement to use automated license plate readers to combat crime. This third bill was discussed in committee, but not voted on. A fourth bill makes it easier to hire persons with minor offenses that were dismissed for law enforcement jobs by establishing new expungement procedures.

“These bills will give Paterson the tools and abilities to make the community safer and to boost economic growth,” Senator Paul Sarlo (D-Bergen/Passaic), chairman of the Senate Budget and Appropriations Committee, said. “They will help transform blighted neighborhoods by reducing crime, combating drug activity and converting abandoned properties to productive use.”

These senators along with Senator M. Teresa Ruiz (D-Essex) authored the measures that will help urban cities throughout New Jersey to tackle persistent problems that hinder economic growth.

Senators toured 12th Avenue in the city observing rows of abandoned properties. This led to Pou introducing legislation to enable the city to create a land bank program.

Senate bill S-2867, approved by the Senate Community and Urban Affairs Committee, will allow municipalities to take control of abandoned and foreclosed properties. These properties will then be available for sale or lease and the proceeds will be used to fund redevelopment in blighted neighborhoods.

“Abandoned properties are a significant problem for Paterson and other urban communities. They are magnets for illegal drug use and other criminal activities, they are an ongoing blight for communities and they cost cities lost tax revenue,” Pou said. “Land banking would give municipalities the ability to convert foreclosed and abandoned properties to productive use.”

Paterson has more than 1200 abandoned properties. It’s estimated that in three years the city saw a 500-percent increase in foreclosures.

“This could be a significant way to take abandoned properties that are a blight on the community and magnets for criminal activities and convert them into businesses, homes or other productive purposes,” Ruiz said. “This will improve communities throughout the state and provide a much needed economic boost.”

To break up the hold of criminal activities in blighted neighborhood Sarlo and Pou proposed bill S-2974 that will allow law enforcement o use automated license plate readers to detect stolen vehicles or cars that were involved in crimes.

Another bill, S-2976, will reduce the population threshold for first-class cities from 150,000 residents to 100,000 which will allow Paterson and Elizabeth to join the ranks of Newark and Jersey City and give them better control over liquor businesses.

The city would be better able to regulate days and hours when beer and wine can be sold for off-site consumption just as Newark and Jersey City are able to do at present. The Senate Budget and Appropriations Committee voted affirmatively on the measure.

Another bill, S-2975, will better allow Paterson to recruit a more diverse police force. The bill creates a pilot program with expungement procedures that favors law enforcement applicants with minor infractions that were dismissed.

This pilot follows Maryland and Connecticut which do not require disclosure of expungement when a charge was dismissed or resulted in a non-conviction.

“It goes against the principles of justice and fairness to deny someone the right to a job when they were innocent or had the allegations dismissed,” Pou, sponsor of the measure, said. “It also hurts the ability to hire good recruits who can help improve public safety in the community. This is a pilot project that will be monitored and reviewed but I believe it can be successful.”

Together these bills, once approved by the legislature, provide urban cities like Paterson the tools needed to address some of the most persistent problems plaguing inner city communities.