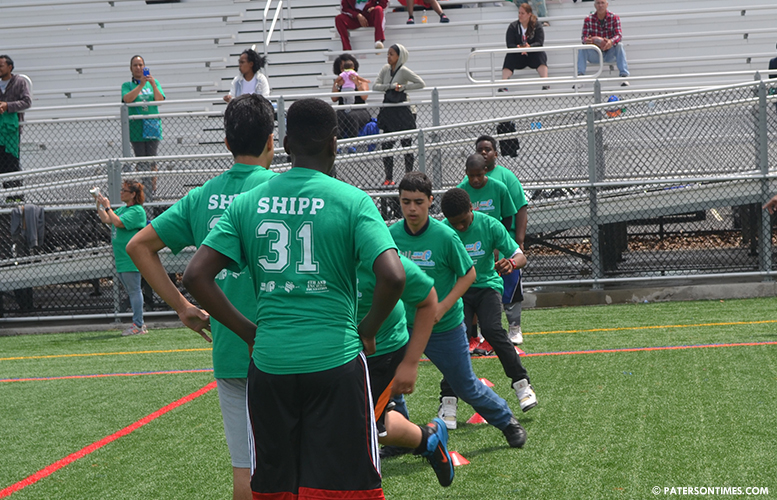 One of those young people 11-year-old Adrian “AJ” Mouzone has been preparing from the night before, said his father David Durham. “He was excited last night,” said Durham.

The father and son traveled from Passaic City to McBride Avenue on Saturday morning to attend the free fundamental camp put on by USA Football and supported by a grant from the NFL Foundation.

The camp hosted by Shipp, a city native, was aimed at instilling the basics of football like properly catching a ball, throwing, running, and tackling.

“A lot of kids said they want to be football players,” said Shipp who spoke to the mostly kindergarten through eighth graders with a small number of high schoolers. To get near becoming a football player the youngsters had to learn the basics.

“They were doing running back drills,” said Kareem Huggins, formerly of the Brooklyn Bolts and New York Jets, who is now a free agent. He had just finished putting about a dozen youngsters through high knee running over bags drill.

“There’s various drills you need to know when you have the ball in your hands,” said Huggins. “We’re teaching them how to go through the bags with their knees up and hold on to the football.”

“I learned how to catch, how to throw the ball, and footwork,” said Mouzone. “And team work too.”

Shipp said kids like Mouzone remind him of himself as he was growing up. “I never had anyone do this when I was growing up,” said Shipp, a former player for the Arizona Cardinals, about the camp.

Shipp attended School 25, 19, and 27 growing up in the city. He said camps like this allow young people to see role models, people who came from the same neighborhoods, and made it. He said it also communicates an important message when they see the players in person: If he can do it so can I.

Shipp and Huggins weren’t the only two players at the camp, there was also Morlon Greenwood, former Miami Dolphins’ player.

That message appears to have gotten to some of the youngsters.

“He made it from Paterson,” said 14-year-old Zyaire White, of Shipp, “so I think everybody can make it.”

White said he wants to become an NFL star. Shipp told the young people before the start of the camp, that they can football players, but that’s not the only road to success.

He emphasized education. “The number one thing is education. I don’t care how good you are in the field,” said Shipp. He said they don’t have to just aim to be athletes, but also become lawyers and doctors. He cited his brother Michael Shipp, a United States District Judge for the District of New Jersey.

This message too appears to have resonated with the youngsters. “It’s important because you can’t get anywhere in life without an education,” said White.

Shipp has been holding football camps in the city for eight years, said Emmanuel Capers of 4th and Inches Foundation. “It speaks very highly of him,” said Capers. “He could be on vacation or doing something else.”

Instead Shipp ran the camp from 9 a.m. to 3 p.m. on Saturday. The light rain that fell during the first-hour of the camp failed to stop the youths and Shipp.

“He’s always done a lot,” said Eddie Gonzalez, former school board member, who donated 300 bottles of Gatorade and water through his civil organization.

“It’s good to see players that came out of Paterson give back to the community,” said Dinamaria Brito, who brought her 9-year-old son Jayden to participate in the clinic.