City police arrested a man who wrapped a handgun inside a sweatshirt and placed it on top of a city trash receptacle on Clinton and North 6th Street to throw-off police officers responding to a call of a gunmen in the area. 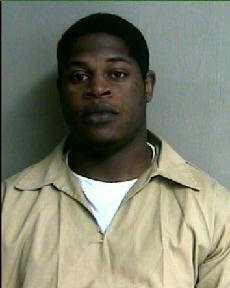 Kendale Wilson, 28, was arrested on weapon charges at about 7 p.m. on Monday, after he attempted to disassociate himself from a loaded Smith & Wesson 40 caliber handgun that was in his possession.

Police officers Angel Jimenez, Richard McCausland, and Sebastian Gomez responded to the area on reports of two suspicious individuals with a handgun. The officers found four men hanging outside a liquor establishment in the corner.

Upon seeing police, one of the group member placed a black sweater on top of a city garbage, inside of which was a loaded gun. Wilson attempted to walk away from the scene, but he matched the description of one of the suspects reported to police.

Police officer Jimenez closely observed Wilson as he walked away from the corner. The officer noticed Wilson kept looking back to monitor any movements from the officer.

Jimenez notified McCausland and Gomez to stop the group as he investigated the abandoned sweatshirt. The group was stopped in mid-block, according to police. Jimenez recovered the loaded weapon which was wrapped inside the sweatshirt.

The weapon was stolen out of Sussex County, according to police. Wilson was the subject of a BOLO (be-on-the-Lookout) alert and he had an outstanding arrest warrant.

Wilson was arrested and charged. Police notified the New Jersey State Parole board of the arrest.

“This arrest can be attributed to alert and quick thinking police officers, who took a dangerous criminal and weapon off our streets,” said police director Jerry Speziale.