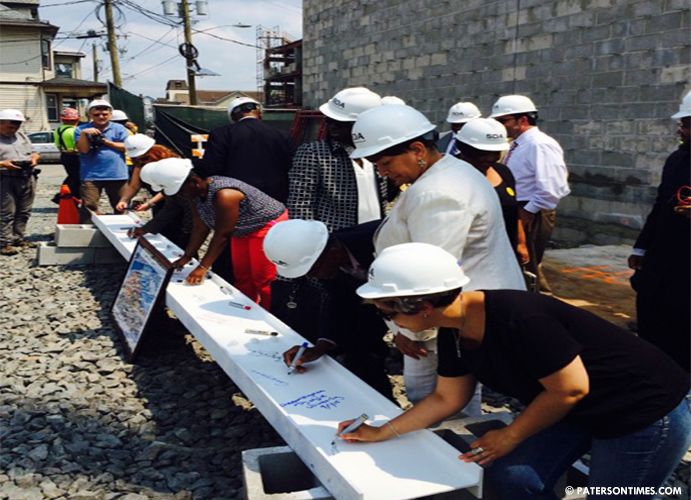 Marking significant construction progress at the new School 16, state and local officials held a “topping off” ceremony on Wednesday afternoon.

The ceremony usually celebrates the placement of the final beam at the building which will open for students in September 2016. Those present at the construction site located at 22nd Avenue and East 20th Street signed their names on steel beam which was lifted into place topping off and finishing the streel erection of the school.

“We are going to provide you the buildings and are going to make sure that children in Paterson have a real educational opportunity so that they may compete with any other child on the planet,” said Charles McKenna, head of the School Development Authority (SDA), during the ceremony.

This building along with another school under construction in the corner of Hazel and Marshall streets will help to alleviate overcrowding of city schools.

“The construction of two new elementary schools – School 16 as well as Hazel & Marshall – is great news for our school district and this city,” said state-appointed district superintendent Donnie Evans. “Our students deserve to receive a quality education in facilities that meet 21st Century learning standards; and we thank the SDA for honoring their commitment to open both schools for the 2016 school year.”

The total estimated cost for the construction of School 16 is $62.3 million, according to the SDA.

After the beam signing and placement officials opened a time capsule that was buried in the old School 16 which had to be demolished to make way for the new building. The content of the capsule dated back to 1890, the year the original school opened. Inside, various documents were found including a Certificate of Incorporation, a card containing the name and addresses of Paterson’s Board of Education members from 1890.

Also found inside the capsule was an address by Paterson’s 1890 Board of Education President, a Book of New Jersey School Law from 1889, and three former Paterson newspapers: The Daily Press, The Paterson Daily Guardian, and The Morning Call.

The district’s facilities director Steve Morlino was part of the time that recovered and opened the capsule. He described how amazed he was by the condition of the documents inside. He went on to explain that “the piece [of stone] that held the capsule was a cornerstone in the former building” and that “typically, in the olden days, time capsules were placed in these stones and inscribed with the date.”

Both Morlino and Evans seemed keen on the idea of maintaining the time capsule tradition in the new school projects. Time capsules open a window to the past giving the openers a glimpse of the Paterson of yore.