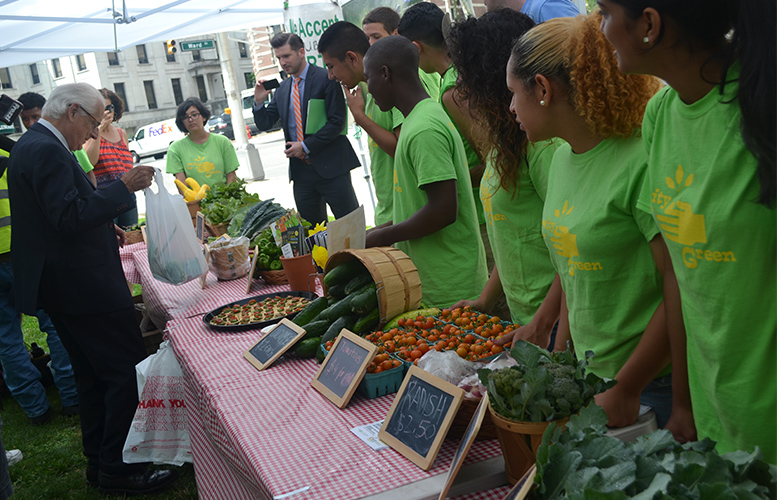 Jersey fresh cucumbers, jalapenos, bell peppers, tomatoes, summer squash, lettuce, and a variety of other vegetables grown and picked locally were available for sale at the grand opening of City Green farm stand outside the Robert A. Roe Federal Building on Tuesday morning.

The farm stand manned by Paterson and Clifton high school students who managed to obtain jobs with the non-profit for the summer is an effort to provide garden-fresh groceries to urban residents who often do not have access to fresh produce.

“Our farm stand in downtown Paterson is to create access and affordability of fresh farm, healthy food. All the foods are grown in our City Green farms,” said Jennifer Papa, executive director and founder of the non-profit.

Papa said the group has a half-acre farm in Paterson and a three-acre farm in Clifton. Papa takes affordability seriously. She said the non-profit accepts food stamp and WIC vouchers. “We double the value of them with a program called double value coupon program,” she said.

She was joined by elected officials from city, county, and federal levels this morning to open the farm stand in a shaded area in the corner of Ward and Clark Streets.

“You got to shop here because the groceries are fresh and they are grown here,” said congressman Bill Pascrell.

The congressman approached the farm stand, exchanged words with young people manning the stand, and did some shopping of his own.

“We need fresh fruits and vegetables because most of the food that comes into this country are not inspected,” said Pascrell.

The stand will run every Tuesday from 10:30 a.m. to 2:30 p.m. to provide city residents with inexpensive fresh groceries, said Josh Kane, farm crew leader for the organization.

Kane led a group of eight paid interns to operate the fresh produce stand. One of those interns, Nicolle Hiromoto, 16, of Clifton, said she joined the organization after looking for a summer job last year.

“There wasn’t much hiring for a 15-year-old,” she joking remarked.

Hiromoto has been with the organization for two years during which she has learned about sustainable farming and the lack of fresh produce in certain parts of a given locality. Papa said the summer job also prepare students for the job market.

Hiromoto said the non-profit holds workshops to teach students about resume writing and vital skills necessary to acquire and keep employment. On her resume, the teenager has two years of experience working for City Green, she said.

As Hiromoto shared what she has learned from working with the organization her peers were taking small number of customers. “I bought the little tomatoes. I bought scallions, brown eggs, and a couple of cucumbers,” said Lisa Wallace, city resident.

When asked if she has been shopping at the City Green stands which have been around for the past four years in downtown Paterson. “We just got curious. We were watching it from across the street and thought we’d come and check it out. And I’m glad we did,” she said.

The stand setup in front of the federal building with partnership with the United States General Services Administration (GSA) is open to everyone as it grows and expands to increase the number of vegetables from about a dozen to many more as the summer progresses.

“We want our federal building alive,” said Denise Pease, regional administrator for the administration. The building was alive with cameras, reporters, and officials hanging about the farm stand.