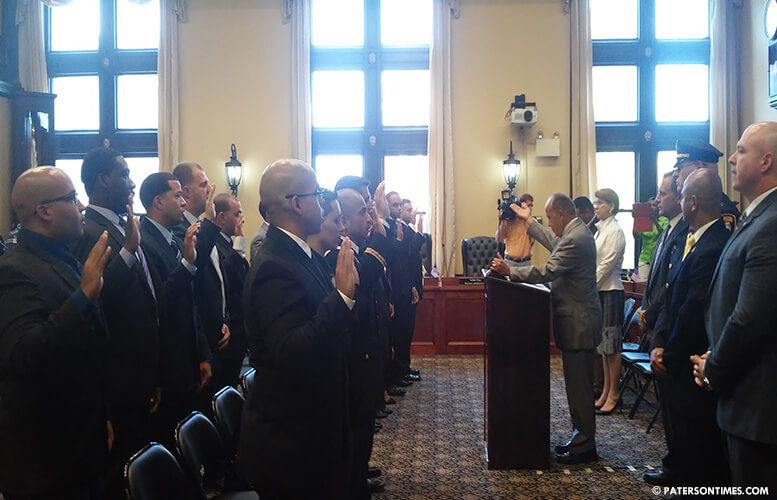 The 21 new police officers set inside the council chamber as the mayor administered the oath after municipal officials gave brief speeches. Torres invoked his promise to hire 100 new police officers to bolster the police ranks to address the city’s crime problem.

“With the addition of these men and women before us today stand as a down payment on that promise,” said Torres. The mayor welcomed 26 police officers last year. This year, in addition to the 21 regular police officers, he has hired 25 special police officers who will have certain police powers to handle quality-of-life issues.

“Policing is much like the sunrise and the sunset,” said police director Jerry Speziale to the incoming 21 cops. He said police officers are seldom noticed until a resident comes in contact with them or is in need of their assistance.

The 21 officers, whose families were inside the chamber, still have six-month worth of training left, said police chief William Fraher. He urged them to stick to going through the training, stating that grit, perseverance, and determination determines success in any endeavor.

Fraher warned the families, “Holidays are what other people have.” He said police officers often have to take time off during irregular times of the year.

The chief explained the meaning of the oath to the new recruits. “It means doing the right thing all the time,” said Fraher.

Cruz commended the mayor for making public safety a “top priority.” The city will incur, just in salaries, $714,000 for the first year. Each police officer will receive a $34,000 salary, said city officials.

“Today is a day you’ve longed and waited for a long time,” said business administrator and state senator Nellie Pou to the recruits.“Please make us all proud.”

The following new police officers were sworn in: