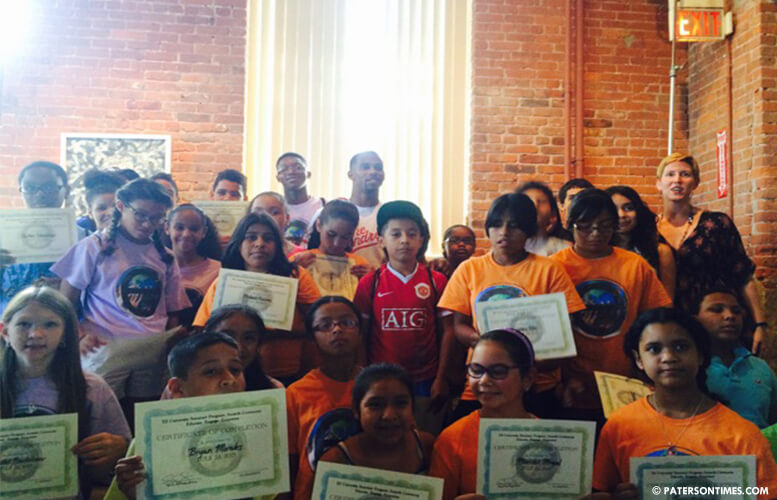 42 students were recognized at the Paterson Museum with certificates for spending four weeks in the Paterson Pride Project, a summer camp focusing on science, technology, engineering, and mathematics for students entering 5th-9th grades.

A hometown hero Cruz attended the ceremony and enthusiastically engaged with the kids and crowd. He addressed the students emphasizing the importance of STEM education. “These subjects are vital to advance to the next level,” Cruz told the students. “To progress to the next stage.”

Cruz shook the hand of each of the students and handed each youngster a certificate. Cruz’s Victor Cruz Foundation served as a sponsor for this year’s summer camp offered as part of E3 University 21st Century Community Learning Center put on through a partnership between the YMCA of Paterson and the Paterson Education Fund.

Rosie Grant, executive director of Paterson Education Fund, explained how the project got started with a grant from Hoffmann-La Roche many years ago before it left New Jersey. Next year Cruz’s foundation and the Hamilton Partnership for Paterson may provide more funds to expand the project.

The three organizations have formed a partnership to provide opportunities for city students.

Youngsters presented the research they did as part of the program utilizing skills they learned through the summer including digital photography, green screen video technology, stop motion animation, and videography.

They also studied traditions of Lenape culture, hydropower, industry and invention, and the impacts of urban development on local ecosystems. Their final projects focused on reducing plastic use in the city and preparing for future natural disaster.

Sarah Sterling-Laldee, project director of the E3, said the students weren’t the only ones learning. Teachers at the program received professional development experience. “Basically, we did our own research so we could present it as best as possible to the kids and educate them,” said a teacher, Thomas Perea.