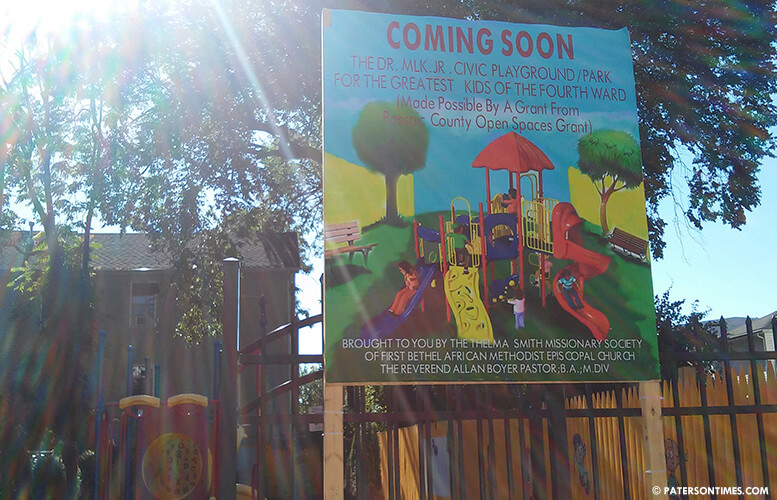 With a grant from the Passaic County Open Space and Farmland Preservation Trust Fund, the Bethel AME Church has managed to purchase and turn a vacant eyesore in the 4th Ward into a children’s playground.

The playground almost at the corner of Auburn Street and Godwin Avenue is sandwiched by a vacant lot on one side and an abandoned, boarded up property on the other. So far the playground has a children’s slide, benches, a plaque dedicating the playground to Martin Luther King Jr., a wooden fence, and in front of it a black aluminum fence to regulate play hours.

“It’s not much, but it’s something,” said the pastor. “It gives them a safe place to play for a while.”

Boyer said the church purchased the property last July for $60,000 using funds it obtained from Passaic County open space. He would not say the exact amount of money his church received through the open space grant, but county records show the church was awarded $60,000 to purchase the lot for the playground and another $35,438 for park development.

I think it’s a starting point to make change, said Larry Wilder, a city resident, who helps with the upkeep of the park.

Wilder said the park is open from 10 a.m. to 6 p.m. for children. “Kids are taking advantage of it,” said Boyer. “They come in, they run around.”

On Friday afternoon, with soaring temperature, there were not any kids in the playground. On the property next door a large group of men were loitering about. Boyer said some of them agreed to keep the park clean.

The pastor said he had a bigger dream for the playground named Dr. Martin Luther King Jr. Civil Playground. He points to the two neighboring properties and says a future expansion of the playground is likely.

“My dream was the community would [get involved],” said Boyer. In an area hard hit by drugs and poverty, the pastor did not find many willing to contribute to a larger playground and park.

Boyer said an out-of-town developer donated $1,800, but that was it. However, that has not discouraged the pastor.

A steadfast, optimistic, and purposeful pastor, Boyer said he is trying to get the lot and the house next door to expand the playground.