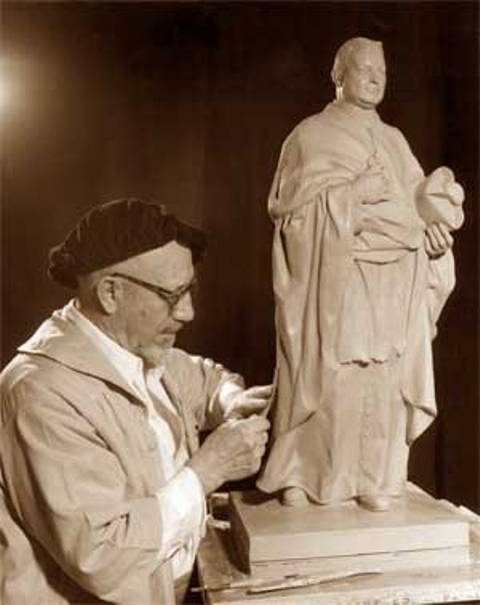 Paterson’s Historic Preservation Commission will be hosting a tour to showcase the legacy of famed city sculptor Gaetano Federici on September 19, 2015.

The event put on in partnership with the Passaic County Historical Society and the Passaic County Community College will include a guided bus tour of Federici’s life and works with stops at the Lambert Castle and the Hamilton Club.

Most recently, the Passaic County Historical Society has started the Gaetano Federici Restoration and Exhibition Project in hopes to preserve and showcase some of sculptor’s original pieces in the Lambert Castle.

Passaic County Community College is already home to the Federici Studio Collection which has more than 500 objects of Federici on exhibition in their historic Hamilton Club Building.

Federici has more than 40 notable statues within a two mile radius of downtown Paterson City Hall, most of them being of notable figures such as Mayor Andrew McBride, Dean McNulty, and Lou Costello.

Federici immigrated to Paterson at the age of seven, and lived on both West Broadway and Oxford Street. He studied around the globe with major bronze makers such as Giuseppe Moretti and Charles Henry Niehaus before coming back to Paterson.

In December 2014, the Bergen Record reported that one of Federici’s sculpture, whose whereabouts was marked unknown, was found near an old shooting range in Ridgewood, New Jersey.

The bus tour will meet and begin at 10:00 a.m. at the Lambert Castle located at 3 Valley Road in Paterson. It will end at 1 p.m.

Guests are encouraged to reserve seats in advance. Cost for the tour is $10 per person.

For more information and to reserve a seat please contact Kelly C. Ruffel of the Historic Preservation Commission at (973) 321-1220 ext. 2263.