Council members have given their approval for the city to solicit bids for the first-phase of Hinchliffe Stadium rehabilitation.

This phase will also see the rehabilitation of three large and two small sections of bleachers situated in the corner of Liberty and Maple streets. 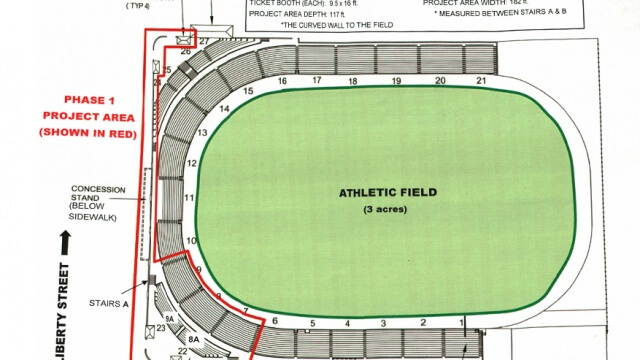 The diagram shows, in red, the phase-one work area.

The solicitation of bids follows the completion of first-phase construction documents by New York-based architectural firm Wank, Adams, Slavin Associates (WASA) which was awarded a contract in 2013 to conduct field investigations of the derelict stadium that’s been in a state of disrepair since 1997.

WASA was awarded a $1 million contract in mid-June to prepare construction documents for phase-two.

Cost for first-phase is estimated at more than $5 million, according to city officials. But the true cost won’t be known until the bids come in.

Paterson voters gave a green-light to city officials in a 2009 non-binding referendum to borrow $15 million to renovate the stadium that served as home to the New York Black Yankees and New York Cubans of the Negro League.

Seven month after the approval Mayor Jose “Joey” Torres was booted out of the office. Torres returned as mayor last year and has vowed to see the stadium restored at the end of his current term in 2018.

Hinchliffe Stadium, a national landmark, is one of the few remaining places in the United States, where the Negro League played in a segregated America. The stadium produced such baseball greats as Larry Doby, Josh Gibson, William Julius “Judy” Johnson, Oscar Charleston, and Leroy “Satchel” Paige.

The endangered historic stadium built in 1932 was included in the revised boundaries of the Great Falls National Historical Park through U.S Congressional action in 2014.

The City Council approved the solicitation of bid for first-phase rehabilitation of Hinchliffe Stadium last Tuesday.