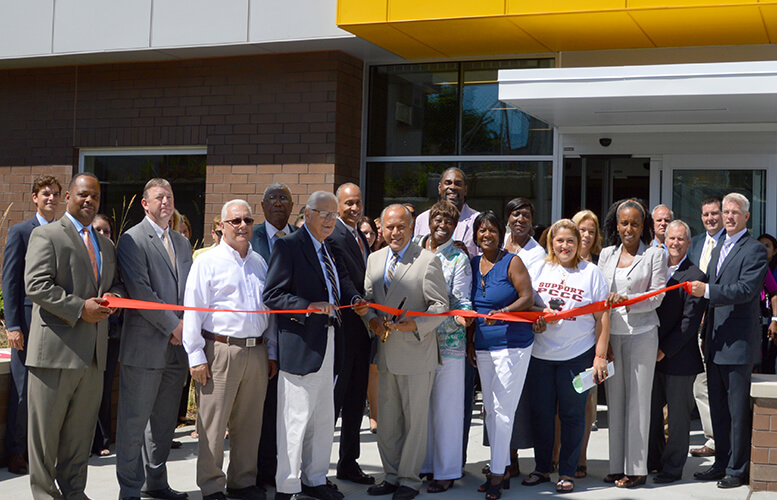 “This development is intended to be both a source of pride and comfort to the seniors who will live here, as well as a catalyst in the revitalization of this neighborhood,” Harry Moody, developer at Pennrose Properties, said.

The housing development features amenities such as a fitness center and a library. The Leadership in Energy & Environmental Design (LEED) certified building will help seniors conserve energy and save money through lower utility bills.

“This project turned an abandoned industrial site which was being as a drug den into a first-class senior housing community,” Congressman Bill Pascrell said. “This revitalization effort will reduce neighborhood crime and create a more integrated community with a sense of place that comes from giving seniors more space and having a walkable neighborhood.”

Pascrell played an instrumental role in ensuring the city received federal funding that allowed for the Freedom Village. In 2010, the city’s original Hope VI grant fell short by one point, the next year Pascrell’s office worked closely with the Housing Authority and HUD to review and submit a stronger application to the federal government.

A year later the city received a $18.4 million federal HOPE VI award. Part of that award was used to fund the Alexander Hamilton housing development at the site of the notorious Alabama projects. The rest of the funds were allotted to the Freedom Village, officials said.

Once the second phase is completed the Freedom Village will include 133 apartments.

“Freedom Village is a landmark event in The Housing Authority’s commitment to providing affordable housing for the City of Paterson’s seniors,” Irma Gorham, executive director of the Paterson Housing Authority, said. “This community is a critical aspect of the redevelopment plans of the Fourth Ward, as it will be pivotal in helping to transform the area.”

The Freedom Village is professionally managed by Pennrose Properties. For leasing information at the new development call (973) 321-7740 or visit the leasing office at 69 Straight Street.