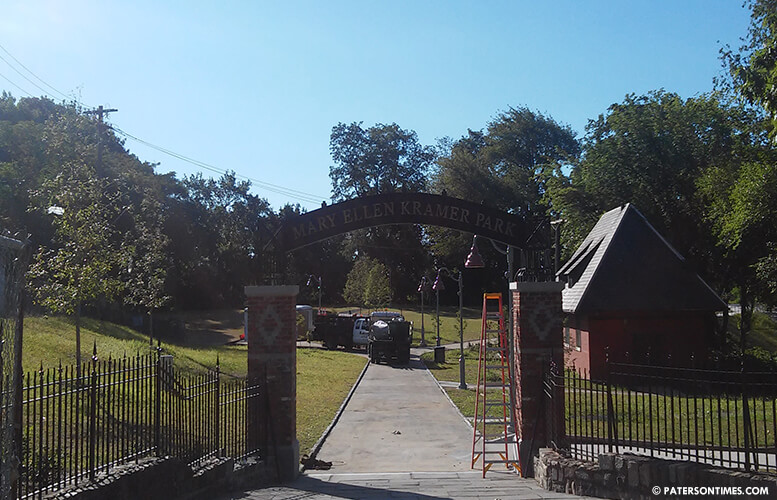 The more than $2 million improvement project has concluded at Mary Ellen Kramer Park, according to city officials.

A re-dedication ceremony to officially re-open the park is scheduled for August 28th, 2015 at 11 a.m. at the Great Falls National Park.

The park is named after Mary Ellen Kramer, wife of former Paterson mayor Lawrence “Pat” Kramer. The first lady played a pivotal role in the preservation and restoration of city historic sites.

She led the fight against building a highway over the Great Falls.

The park which is situated off Maple Street below the historic Hinchliffe Stadium was closed during World War II and remained so until the 1970s, when Mary Ellen Kramer re-opened it to the public.

The space has always been used as a public park for picnics and visits to witness the water falls since the 1770s.

After the park opened in the 1970s volunteers, non-profit groups, and public funds from the city gave shape to the present layout. That layout has been expanded and improved during construction which began on November 3rd, 2013 with funding from New Jersey’s Green Acres program and Passaic County’s Open Space and Farmland Preservation Trust Fund.

Much of the improvements focused on landscaping, better pathways, and the building up of a stone wall that allows a visitor to get much close to the falls. JC Landscape Construction and Management Company of Pequannock which was contracted to make the improvements also rehabilitated the site which was contaminated due to past industrial use.

The revamped park will be open to the public after the August 28th, 2015 re-dedication ceremony.

Overlook Park on the opposite side of the water falls is next up for a face lift.