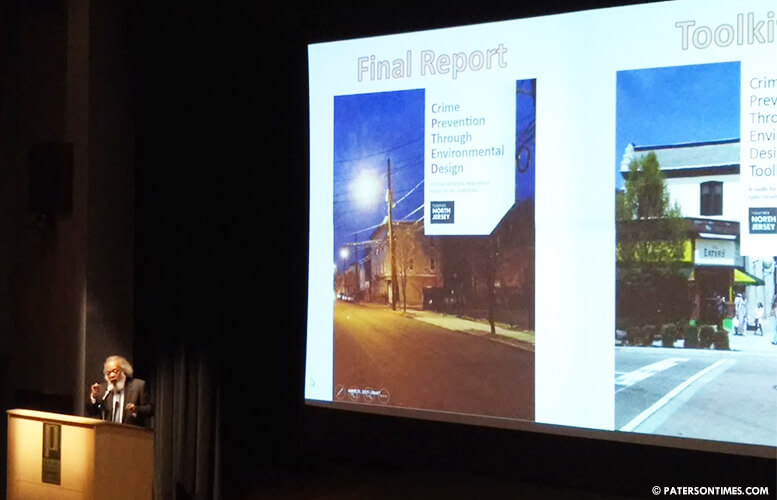 An audit of six city corridors in crime stricken neighborhoods using the principles of crime prevention through environmental design (CPTED) reveals much that can be changed to deter crime.

On Rosa Parks Boulevard dotting the sidewalks with trees on both sides can reduce the intensity of the desolate urban landscape, said George Meadows (pictured), principal planner at the city, who presented the findings of the CPTED audit at the Passaic County Community College Theater on Thursday evening.

“Overflowing trash cans, litter and broken and cracked sidewalks and curbs are common issues affecting ‘image’ throughout the focus corridors,” found the report drafted April of this year.

The report also states decorative trash receptacles that are ubiquitous in the city are sporadically emptied out. “Many of the streets are overrun by litter and dumping of household garbage,” reads the report.

There’s also the problem of graffiti the report makes mention. “Graffiti sends a message that the neighborhood is not maintained and often times generates fear, instability and, if left unattended, can become economically detrimental to the neighborhood and city as a whole,” reads the report.

Gilmore has been railing against trash and litter filled city streets in recent months.

Nancy Grier of the city’s Neighborhood Assistance Office, who was involved in the audits, said on some streets store owners were covering 80-percent or more of their storefronts with advertising, when city ordinance only allows for 30-percent.

The covering diminished a natural surveillance, according to the report. Store owners placed the covering to hide their cash registers from street view so as to deter robbery attempts. Many shop owners did not know there’s an ordinance against covering their entire store front. Grier said community members visited the stores and informed the owners who complied.

Jerry Flach, community program officer for Paterson Habitat for Humanity, said her organization designs homes to provide natural surveillance which prevents criminal activity. “They have front porches on the second floor so you get extra eyes on the street,” she said.

Cleaning up city parks, designing community quilts or graphics to take ownership of corridors, and putting on more community activities are some of the prescriptions to better rundown neighborhood with high crime rates, suggests the report.

“When positive things are happening negative things have no place,” said Antoinette Brevard, 1st Ward resident. The study focused on 1st, 4th, and the 5th Wards.

The study provides specifics to implement in certain corridors. For example, on East Main Street, the study suggests expanding Cobb Park to include a picnic area.

Mayor Jose “Joey” Torres said he would like many of these changes implemented in the six corridors. He said he will attempt to move on the suggestions during the three years that remain in his mayoral term.

Torres said the study has his administration’s support.