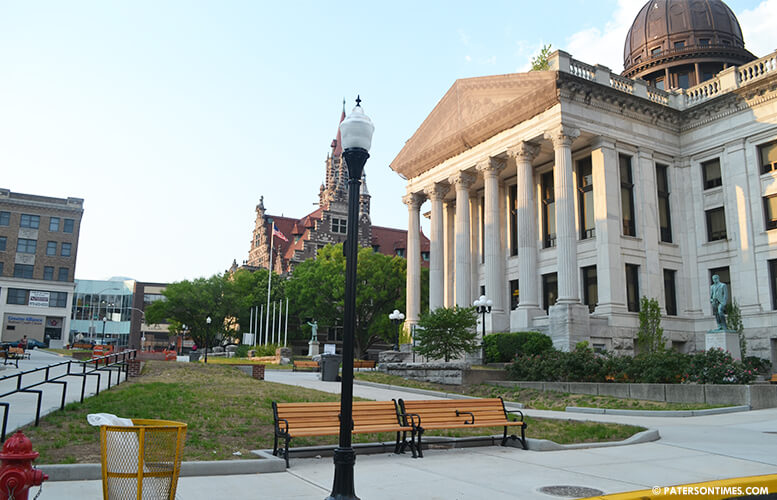 Passaic County officials reduced a $780,290 contract with an East Orange-based construction firm which received the award to complete the Passaic County Courthouse Plaza on Hamilton Street in Paterson by $81,162.

The first reduced the contract by $198,330, according to county records, by cutting an unneeded fire hydrant reset, subtracting decorative light fixtures, and reducing the number of bollards. The first change order also cut dyed concrete for sidewalk.

The engineer said the plaza did not need as many bollards to keep cars off it as originally thought. This determination was based on the road speed and height of the curb. “We really don’t need all those extra bollards,” he said.

The second change order increased the contract by $117,168, records show, by adding undyed concrete material for sidewalk and brick veneer. Both change orders are dated July 27th, 2015. The change orders were approved by the Passaic County Board of Chosen Freeholders.

Freeholder director Hector Lora did not return a call seeking his comments for this story.

“This project went way over what we anticipated in the budget,” said Mettlen. “We looked for ways to cut some costs.”

Mettlen said often it’s difficult to determine the exact amount of materials a project requires. In this case the unnecessary items were subtracted. Although materials have been added and subtracted in the two change orders, neither changed the true scope of the project, he said.

The anticipated completion of the plaza is set for mid-October. A visit to the plaza shows much of the construction has been completed. Mettlen said the county is waiting on a Passaic County relief map that will be placed at the center of the plaza.

A Pittsburgh-based company is presently casting the sculpture ere it arrives in the county for installation at the plaza.

The project had a groundbreaking in May of this year. A dedication ceremony will likely be held in October.