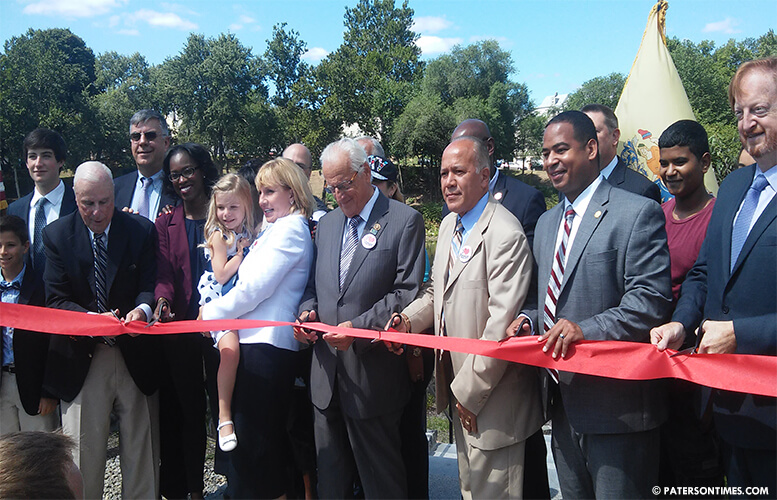 After almost two years of construction the city on Friday morning opened a renovated segment of the Great Falls National Park named in honor of the former first lady Mary Ellen Kramer who fought vigorously to preserve the park land.

The face lift to Mary Ellen Kramer Park includes new lighting, paved walkways, benches, picnic tables, landscaping, and a long stone wall that extends from the beginning of the park adjacent to the Hinchliffe Stadium and extends to the footbridge over the Passaic River in the middle of the Great Falls National Park.

Darren Boch, the superintendent of the national park, said the rebuilt wall allows a visitor to get close to the chasm of the mighty water fall and to have a sublime experience unlike anything else as the spray mist is felt on the skin. “You get to experience something that you don’t expect to find in a city,” he said.

More than 100 people – including municipal, state, and federal officials — gathered at the park to celebrate its opening to the public after an 18-month construction period that included remediation to the contaminated soil.

Speaking at the re-dedication ceremony congressman Bill Pascrell recalled Mary Ellen Kramer showing him a tattered park in the 1970s. “If you looked across the river it was a disaster,” said Pascrell.

She told Pascrell the people of Paterson could do better.

Under the first lady’s command the park which opened in the 1970s after being closed since World War II was cleaned up by Patersonians. Prior to the opening, the first lady thwarted an effort by New Jersey to build a highway over the Great Falls in the second half of the 1950s.

Her husband Lawrence “Pat” Kramer was mayor at the time. “It just adds to the magic that’s happening here,” said the former mayor after he witnessed the new view unlocked by the rebuilt stone wall.

The first lady’s family was well represented at the ceremony which included her kids and grandchildren.

“Her contribution to this city is immeasurable,” remarked mayor Jose “Joey” Torres. Almost all the speakers acknowledged the fierceness with which Mary Ellen Kramer preserved and protected the land that is today designated as a national park.

“Look at everything she did the years she was the first lady of Paterson. It’s an amazing story and an amazing legacy,” said New Jersey‘s lieutenant governor Kim Guadagno.”She fought the good fight.”

The $1.95 million renovation and remediation of the park was funded through the New Jersey Department of Environmental Protection (NJDEP) Green Acres Fund which provided $1.2 million, the New Jersey Hazardous Discharge Salvage and Remediation Fund which supplied $500,000, and the Passaic County Open Space and Farmland Preservation Fund which gave $250,000, according to the city.

Passaic County Freeholder director Hector Lora said the first lady played a key role in preserving many of the county’s historic treasures like the city’s mills. “It takes an unique individual with a strong spirit to stand up for history,” he said.

Guadagno has visited the city numerous times in the past years. She, like other speakers, focused on the future that Mary Ellen Kramer envisaged for the city through the utilization of its natural landmark and glorious history.

“We feel strongly that any view of Paterson’s future must, by the very nature of cities, carry with it a sense of her past,” wrote Mary Ellen Kramer in January 1973 and quoted by Gianfranco Archimede, director of the city’s Historic Preservation Commission, at the ceremony.

Some speakers recalled their own history at the park. Torres recalled his brother and friends crossing the Passaic River in his youth prior to the installation of the footbridge that now sits at the center of the park.

Pascrell recalled breaking the first lamp that was installed at the park during the 1970s that secured censure from the first lady.

Torres also recalled preventing a developer from building housing in the land that is the national park.

The mayor appears to understand the words of the former first lady which continued: “The delicate problem is to make that history work the city today through jobs, tourism, a broadened economic base, housing, education, and all the amenities so important in making the city a humane place to work and live.”

“Paterson may not be dominated by the factories and the silk mills it once had, but we have hope, promises, and potential and an important place in the nation’s history,” said Torres. “Our goal is to create a destination center that will attract tourists to visit this site and hopefully spur a tourism economy.”