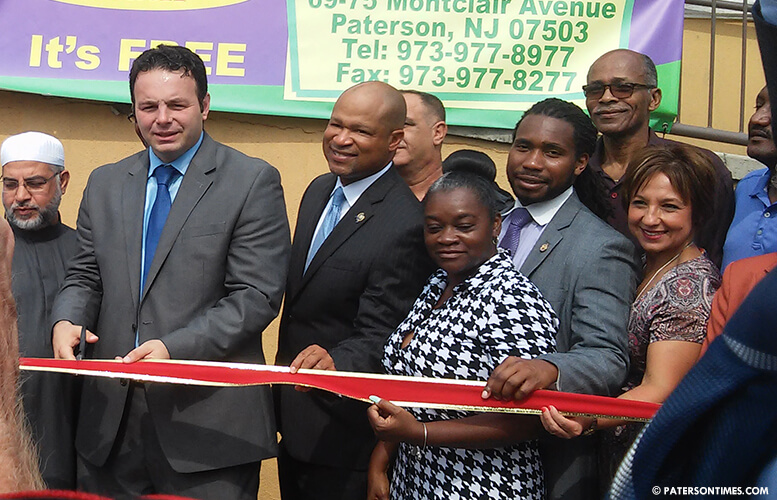 After a lengthy struggle with a troublesome hookah lounge on Montclair Avenue residents of South Paterson warmly welcomed a preschool in its place on Monday morning.

Almost 150 people mostly officials and residents came out for the opening of the Gilmore Memorial Preschool at the former site of Lava Lounge and Dubai Lounge, both of which caused great many headaches for neighbors.

“For five years this was a house of horrors,” said Andre Sayegh, 6th Ward councilman. Patrons of the hookah lounge urinated on lawns, littered, and vandalized neighbors’ properties.

Myrtle Dalessio, who lives next to the building that once housed the two notorious night clubs, recalled the establishment playing music throughout the night. “They were noisy. They were parking all over. They were going to bathroom all over. Having sex in the car. The list goes on and on,” said Dalessio.

“I used to come by here on Friday nights,” recalled Lee Mondelli, board of adjustment commissioner and South Paterson resident. “These people were operating without a liquor license. People were peeing all over the place.”

Neighbors banded together and began to contact city officials to address the problem. Humeyra Celikel, a neighbor, contacted the 6th Ward councilman, to address the quality of life issues that made living near the establishment difficult.

Sayegh worked with other city officials to shut down the Lava Lounge, but it later re-opened under a new name, Dubai Lounge.

“They found their way back and re-opened and the nightmare continued for the neighborhood,” said Sayegh.

“We were able to get people out here to help mitigate the situation, but it continued to linger on,” said police director Jerry Speziale. “This is a great situation that has come from something that was completely disruptive to the neighborhood.”

Drugs, hookah, and gambling were all common at the establishment, said Vildan Celikel, who has lived in the neighborhood for 15 years. She said some nights there would be 300 or more people outside chasing each other, fighting, and vandalizing private property.

Sayegh said residents and municipal officials again shutdown the location. “This was a horrible place for our community,” added Mohammad Qatanani, imam at the Passaic County Islamic Center. “People were crying here.”

Qatanani heard the cries of neighbors and called on community investors to purchase the property regardless of the cost. In January of this year, the property was purchased, said Mohamed El-Filali, project manager for the location.

“We were not going to have the same story again,” said Filali.

“This neighborhood is a strong neighborhood. Things are being built here. And you’re not going to put up with any nonsense,” said congressman Bill Pascrell, who grew up in South Paterson and whose sister lives on nearby Buffalo Avenue.

Sayegh collaborated with the school district and convinced them to operate a preschool out of the location.

The new preschool will educate 75 students in the under-served neighborhood, said school officials. “The school district is now excited about serving South Paterson because we did realize it was under-served,” said deputy superintendent Eileen Shafer.

“We need to turn more establishments of ill-repute to educational centers and we’ll have a better community and a better city,” said assemblyman Benjie Wimberly.

The preschool is the second location for Gilmore Memorial Preschool which operates a preschool in the city’s Eastside section. Brenda Belmont of the preschool said she’s excited at the expansion of her preschool to include South Paterson.

Belmont and others cut the ribbon on the new preschool.

“I’m really happy,” said Vildan Celikel about the preschool. With the building occupied by a preschool residents need not fear a hookah establishment will setup shop – a fear that existed every day the building remained vacant.