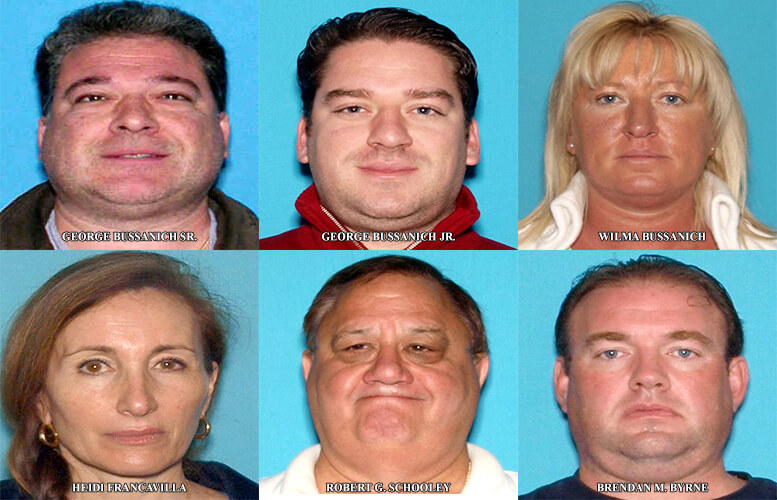 A city man and five others were arrested for allegedly defrauding 15 investors of approximately $3 million through a bogus investment scheme, according to the New Jersey Attorney General’s Office.

The six have also been charged with second-degree charges of securities fraud, misconduct by a corporate official, and theft by deception, authorities said.

Authorities said the Bussaniches and Francavilla have additionally been charged with third-degree charges of failure to file tax returns, filing fraudulent tax returns, and contempt.

Schooley is also charged with failure to file tax return.

“The audacity of these defendants is astounding,” Acting New Jersey Attorney General John Hoffman said. “After the Bureau of Securities exposed how this father and son deceived investors, securing a $5.5 million settlement against them, the defendants allegedly went right back to their old game, defrauding investors of another $3 million and even using some of the new funds to make payments under the settlement.”

Authorities said the father-son duo perpetrated a previous scheme and victimized 26 investors. Last year, the two men agreed to pay $5.5 million which included $4 million in full investor restitution to settle a lawsuit filed by the New Jersey Bureau of Securities.

They went back to 15 of the same investors to raise $3 million some of which was used to pay the penalties towards the August 1, 2014 consent order.

The consent order the father and son entered into barred them from selling securities in New Jersey, a condition they violated less than 13 month later. The father, son, and the other four conspired to circumvent the consent order and launder victims’ money through multiple shell corporations.

“Because Bussanich paid returns to investors, the investors believed he was earning profits for them,” Division of Criminal Justice Director Elie Honig said. “In reality, he simply was giving them back a fraction of the principal they invested, while he, his son and the other defendants allegedly stole most of the money for their personal use, including paying for expensive homes, fast cars and lavish dining and entertainment bills.”

Investigation by the Division of Criminal Justice Gangs & Organized Crime Bureau found the six diverted most of the investors’ funds for personal use. Authorities cited the father and son’s previous conduct from May 2009 to 2013 when they misled investors in sale of unregistered investment notes in Metropolitan Ambulatory Surgical Center, LLC (MASC).

Despite the name of the company it was not an actual surgical center but a holding company controlled by Bussanich Sr., authorities said.

The father and son issued dividend payments to investors deceiving them into believing the investments were generating profits while the duo purchased multiple homes, seven luxury cars including two Maserati Quattroportes, a Ferrari F430 Spider, and a Mercedes ML350.

A month after agreeing to re-pay investors in the consent order Bussanich Sr. began to solicit investments in a fake company he setup with Schooley called Global Fund Management. Between September 2014 and March 2015 Bussanich Sr. and others got 15 of the 26 original investors to invest just over $3 million in the new business.

Authorities said the money was never invested but transferred to personal bank accounts mostly for consumption of luxury goods. George Bussanich Jr. used some of the money to buy his home in Upper Saddle River that’s worth $1 million, authorities said.

Vacations, mortgages, and restaurant bills were some areas the six spent money raised from investors.

Investors were allegedly fooled with dividends and monthly returns reports. The dividends were fractions of the money investors gave to the defendants being returned.

“These arrests should put fraudsters on notice that continued violations of the New Jersey Uniform Securities Law and Bureau consent orders will be prosecuted to the fullest extent of the law,” Bureau of Securities Chief Laura H. Posner said. “The Bussaniches’ egregious fraudulent Ponzi schemes make clear how critical it is for investors to do their homework before they invest – never invest before you check whether your financial professional has a history of fraudulent activity and is registered with the Bureau to work in the securities industry.”

“The game is up for these con artists, who potentially face very long prison sentences,” Hoffman said.