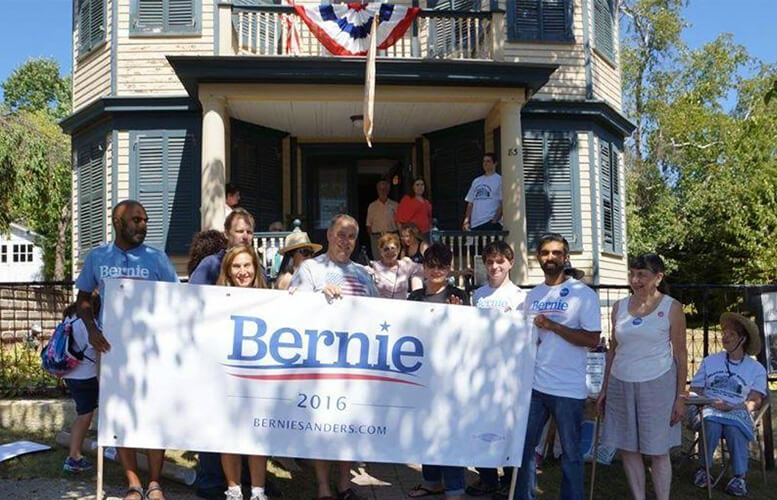 A small band of presidential candidate Bernie Sanders’ supporters marched from the American Labor Museum to the Great Falls National Park in commemoration of Labor Day.

Laurie Perloff-Mauro, organizer of the march, said about 45 people joined the parade route from Haledon to Paterson on Monday.

She said the aim of the march was to build name recognition for Sanders who she characterizes as a staunch supporter of labor.

Marchers walked behind a “Bernie 2016” banner while chanting, “Hey, hey, who are you voting for,” followed by a chorus of “Bernie Sanders!”

Perloff-Mauro said parade watchers gave thumbs up and raised fists in the air in support, but many did not seem to recognize the 2016 Democratic presidential contender who is also a United States senator from Vermont.

Sanders has been speaking out against large corporations and widening wealth inequality in the United States.

“He’s been fighting for the same things for 30 years,” said Perloff-Mauro.

A Teaneck resident, Perloff-Mauro said marchers came from throughout New Jersey. News reports indicate Sanders has been holding the largest campaign rallies of all the candidates seeking their party’s nomination for next year’s election.

“Bernie gets 12,000 people in a rally and no one mentions it,” complained Perloff-Mauro. She said Sanders has been “marginalized” and does not enjoy the same level of coverage received by Republican presidential candidate Donald Trump.

Perloff-Mauro said she does not work for the Sanders campaign, but decided to organize grassroots support for the candidate. She described Sanders as the most “authentic” candidate for the 2016 presidential race.

“He’s running such a grassroots level campaign that he has very few on staff people,” she said. “He’s really depending on us — all of his supporters.”