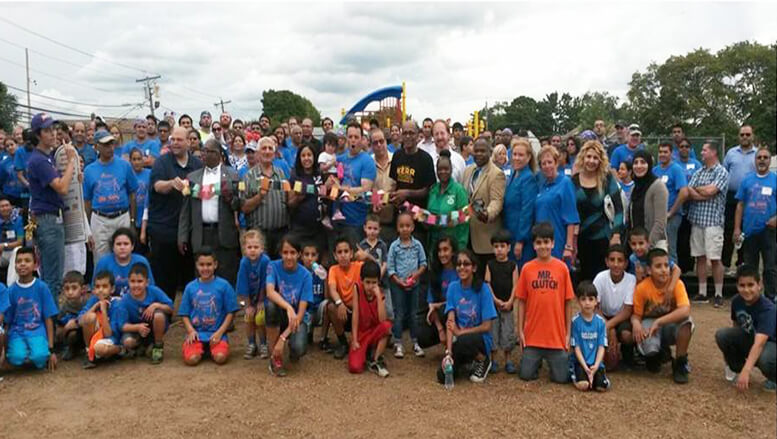 The playground includes three slides, a music wall, a climbing dome, and a host of other playground equipment, said Sayegh. He said volunteers began building the playground at the Trenton Avenue school at 8 a.m. and finished at 3 p.m.

“It’s a first class playground,” said Sayegh. The playground was built by Washington D.C.-based Kaboom! which makes it its business to provide American children in poor areas with state-of-the-art playgrounds.

Other organizations – among them Bridgewater-based Amneal Pharmaceuticals which has a plant in Paterson, the Paterson Public Schools, and the New Jersey Community Development Corporation — also lent a hand to see a new playground in a ward that hitherto did not have one, said Sayegh.

School 25 has tennis courts and a baseball field, but has not had a playground in six years, said Sayegh. “It’s an underserved area as far as play space is concerned,” he said. In matter of hours volunteers changed the 6th Ward’s status a no-playground ward. “Within six hours, 200 volunteers built a playground,” he said.

Children from the southern part of the city had to go to other towns for play areas, said the councilman, who now can play in their neighborhood. He said parents will also save on gas expenses by not traveling far in search of playgrounds for their children.

“There’s nothing like a playground,” said Sayegh when told the city has numerous parks for its youth.

The councilman said his civic association contributed $8,500 towards the playground. He said other organizations also pitched in, but those numbers were not available.

The nonprofit organization Kaboom! has built several playgrounds in the Silk City including at School 5, 27, and the Eva’s Village.