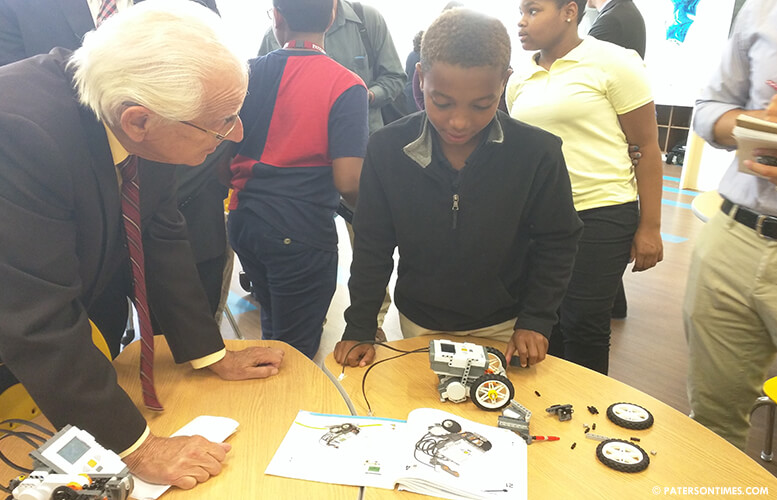 About a dozen students demonstrated their engineering prowess by showing off their newly built robots controlled via tablet computers at the unveiling of a new STEM lab at the Boys and Girls Club of Paterson on 21st Avenue.

12-year-old Michael Kravit of School 24 operated his robot using a tablet computer on the floor of a room that five months ago was bleak and devoid of technology but now features wall mounted screens, robotics equipment, and laptops on every table.

The club spent little more than $300,000 in public and private grants on the project that included the new science, technology, engineering and mathematics lab as well as fine and performing arts studios on the first floor of the building which includes a media center, an art studio, and a dance studio.

The bright and colorful lab with such inscriptions on the walls as “create,” “imagine,” is about 1,500 square feet and designed to inspire – also inscribed on the wall – young people to become the future mathematicians, scientists, and engineers of the future.

Students demonstrated their functional robots to congressman Bill Pascrell, councilmen Andre Sayegh and James Staton during a ribbon cutting ceremony at the club on Monday afternoon.

“You’re involved in stuff you’re never going to get tired of,” said Pascrell as he mentioned the various applications of robotic technology in the 21st century. “It keeps on growing and brings you into a different world every time you sit down to do something.”

The students showed the robots that they created using LEGO NXT Intelligent Brick. The robots with wheels had to be put together and programmed so that they responded via a tablet remote control applications.

Wendy Worden, chief development and marketing officer at the club, said the club used $75,000 in Community Development Block Grant (CDBG) funds and $50,000 from a private donor to renovate and create the STEM Maker Lab. The rest of the funds were used on the fine and performing art studios.

Pascrell emphasized the importance of science and mathematics to technology as robotics encroach upon fields like medicine.

Oscar Lara, STEM director at the club, said he provided the about dozen students with examples, but they installed the parts to create the robot.

“We learned how to program,” said Alexy Rodriguez, 11, of School 9. “Program robots and do robotics.”

The students used an instruction booklet that guided them on how to go about putting together the robots.

Michael Kravit, 12, of School 24, said the robot took two days to build. Belkis Sencion, 12, also of School 24, added that the students had to build it through many trials and errors.

“Every time I started mine it fell apart,” said Sencion. “Once you mess up one thing everything falls apart,” chimed in Rodriguez.

The students said at times the building process was frustrating, but they persevered.

“This is the beginning of great things,” said Staton, 1st Ward councilman. Indeed, Worden said the STEM lab will soon add a 3D printer for the students.

“If they are given any opportunity they are going to make an impression that’s very positive on society,” remarked the congressman.