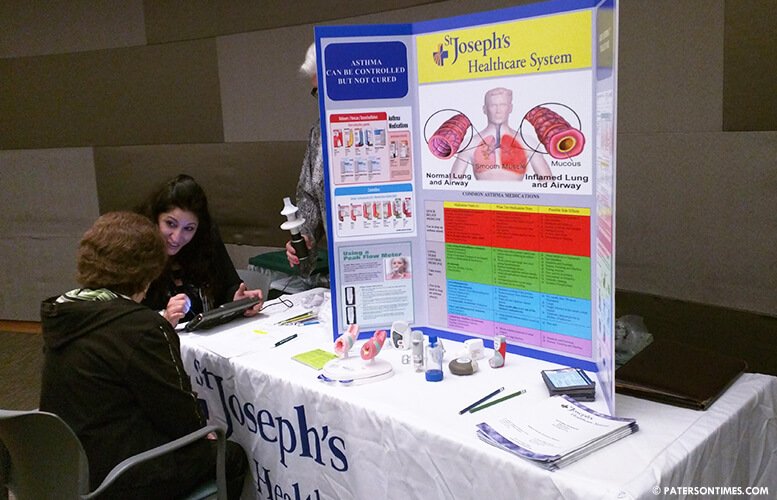 “We want people to be aware of their health,” said Pascrell on Monday morning at the fair. “You got to know something about your own body physically and mentally. And folks are becoming aware of it.”

Staff members from the hospital provided free blood pressure screening to roughly 120 people to make them aware of their health. “Oh my gosh. I can’t count anymore,” said Janet Pagulayan, a nurse, who screened more than 30 people herself.

The hospital’s staff also did blood work for 65 people just two hours into the fair which opened at 10 a.m. and will end at 1 p.m. Blood work and blood pressure screening weren’t the only services at the fair: there was also cholesterol, glucose level, and foot screenings. Pulmonary testing, body mass index (BMI) screening, and a wealth of information was available at the fair.

28 organizations setup booths near the lobby of the hospital among them the Brian Injury Alliance of New Jersey, Veterans Services, the Alzheimer’s Association.

Chad Thompson, a representative of the Brian Injury Alliance of New Jersey, had a booth to disseminate information about brain injury. “A concussion is considered a mild brain injury,” said Thompson. “A lot of time people don’t realize it because the symptoms don’t appear until a few weeks or a couple of months.”

Thompson said his goal is to educate and inform people. He said,“If you’re not sure get it checked out.”

That’s exactly what Joe Nuccitelli, 71, decided to do. He learned about the fair through a robo call and attended to get cholesterol, blood pressure screenings, and pulmonary testing done. The city resident said, “Everybody should take advantage of the screening. Our health is very important.”

Nuccitelli thanked the congressman for the fair. Josephine Xall, 40, came from Passaic City, for blood work at the hospital, but she surprisingly stumbled upon the fair.

“I know it probably has to do with stress, I’m sure about that,” said Teague. He said his wife was upstairs at the hospital undergoing treatment.

More than 300 people came out to the fair in the morning and more are expected to show.

“This is the biggest turn out of any year,” said Kevin Slavin, president and chief executive officer of the hospital. He said following screening if an individual appears to have a mild condition they are referred to their primary physician.

Slavin said in cases of an “alarming” test result the hospital has everything to take care of that individual at the location. He said screening has been made much easier with Obamacare which encourages preventive care by forcing Americans to have health insurance or pay fines. “A lot of people are realizing they need to take personal responsibility for their health care,” he said.

Pascrell said many people are hesitant to visit their doctors for preventative screenings. He encouraged both young and old to undergo screenings.

“You’re going to tear your family down as well as yourself if everything’s a secret and you don’t even know what that secret is,” said the congressman.