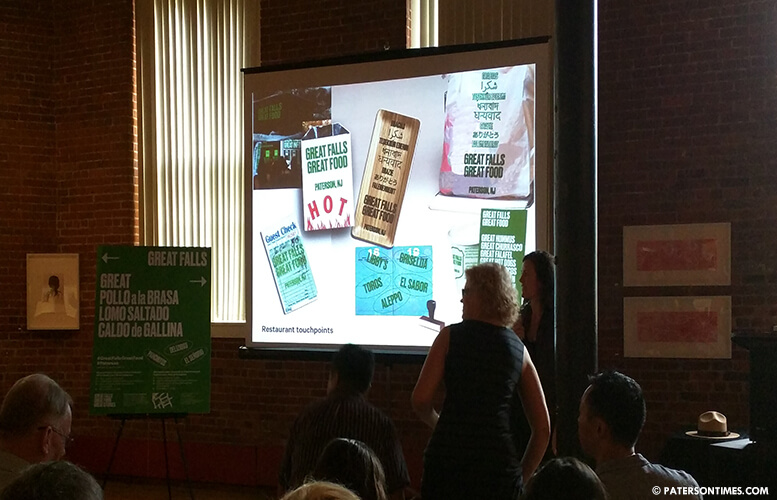 The Great Falls National Park, represented by a multidisciplinary team of young professionals, won the National Parks Now competition. The team submitted an initiative that is connecting Paterson restaurants to the park.

Paterson’s team beat out three other national historic places in the competition that gets teams of young professionals to envisage and implement strategies to better the national parks visitor experience.

The six-person team designed a campaign that is seeking to blur the line between the national park and the surrounding neighborhoods in order to motivate visitors through the lure of food to explore the Silk City.

“Great Falls, Great Food, Great Stories re-imagines the future of visitor experience in urban national parks by bringing the parks into the streets of the city,” said June Williamson, one of the member the team.

Williamson, an architectural professor at the City University of New York (CUNY), said the team as well as students from Princeton University, the New School, and CUNY visited the city more than 100 times since December of last year to craft their winning project.

The project included minimalistic wayfinding signs that are posted throughout downtown Paterson, said graphic designer Manuel Miranda of the Yale School of Art who led the team. The interpretive signs in the three most commonly spoken languages in the city – English, Spanish, and Arabic — point to restaurants and the national park with interesting historical trivia about the city and its prominent figures who played significant roles in American history.

The signs were posted outside the Paterson Museum on Wednesday afternoon when the team unveiled the new project. Similar signs are also posted on the windows of participating restaurants directing back to the national park.

“Food we can say is a lens on culture,” said Darren Boch, superintendent of the park. He wants people who come to visit the Great Falls to venture beyond its boundaries to experience the city’s vibrant ethnic food scene.

“This project is really about connecting visitors to Paterson,” said Boch. Many come to see the national park, but do not stay to wander through the historic city to explore its diverse communities and restaurants to contribute to the local economy, said Boch.

We want visitors to get to know Paterson through its food, said Boch. The project is a $10,000 initiative funded by the National Park Service that not only encourage visitors to explore the city’s restaurants, but also to reshape its image.

“What we’d like to do is redefine how people see Paterson,” said Frances Medina, a communications consultant. She said the project includes a social media campaign with the hashtags #GreatFallsGreatFood, #Paterson – tags visitors will use to share their taste of Paterson.

The signs posted throughout downtown asks visitors: “What Brought You to Paterson?” and “Where Will a Picnic Take You?” to elicit their stories. “We’re asking people to share stories, share memories,” said Medina. “It’s about a broader connection to Paterson and why people are here.” She said the call to actions urge visitors to share their stories.

Medina said she wants to see the narrative of Paterson shift towards food and visitors’ stories as opposed to violence. “We need to highlight other things when it comes to Paterson and food is one way to do it.”

The mantra of the project is: Park is City; City is Park. The project’s launch attracted roughly 50 people. The attendees broke up into three groups to hit the three Market Street restaurants — Panchito’s, Delizioso, and El Senorio Restaurant — that are part of the pilot program.

Champa’s restaurant had a sign on its window that promoted his establishment and had a directional icon pointing back to the Great Falls.

Marisa Lau of the Hamilton Partnership for Paterson which is part of the project’s advisory committee thought the food was delicious. “They’ll find something they like here,” she said about visitors journeying from the park to nearby restaurants.

Champa said the park has the power to revitalize the area surrounding the Great Falls. Similarly, Carlos Vera, owner of Panchito’s, said the project will bring more customers to his business.

Team members said Vera and others have been convinced to allow visitors to take food in branded bags that bear the pilot’s name to the park.

Vera concurred with Champa saying the park could serve as the engine to revitalize the neighborhoods around the falls.

“This is a small start. Folks are onto something,” said Leonard Zax, president of the Hamilton Partnership for Paterson, about the pilot.

The team’s pilot will run until November after which it will be renewed in the summer. The partnerships formed between the park and the restaurants will be carried over to the Taste of Paterson, a food festival involving the restaurants, scheduled for summer 2016.

Zax said the team’s project will encourage visitors to explore beyond Overlook Park. He said more than 150,000 people visited the park last year and 200,000 are expected to do so this year. Out of that number many took a picture at the Alexander Hamilton statue, saw the water fall from the parking lot, and left.

“What we want to do is remind people there’s much more to see in the city than just Alexander Hamilton’s statue and the view from the parking lot,” said Zax.