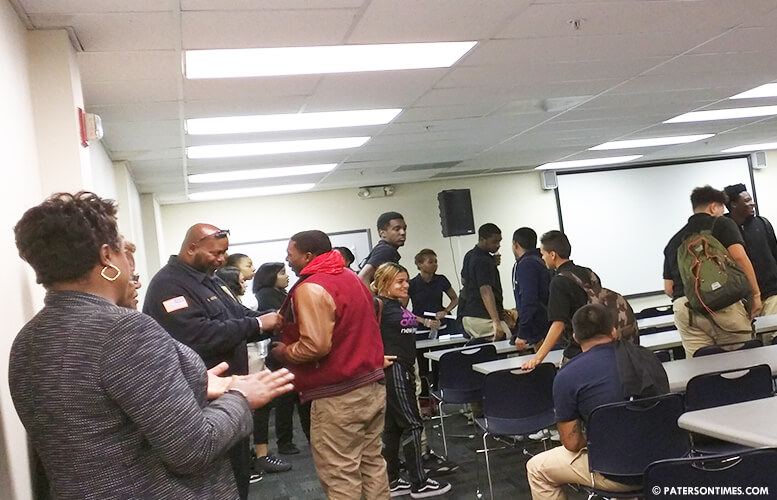 Dozens of students from the alternative high school Yes Academy took to the streets on Monday morning to protest conditions at their State Street building which houses three academies.

Jamel Briggs, 20, a student at the school, said students from the Great Falls Academy, another alternative high school, constantly disrupt instruction at the Boris Kroll mill building. He described the building with three schools as “chaotic.” The building also houses Destiny Academy.

“We can’t have a good class because kids from the other schools walk in and interrupt us,” said Briggs.

60 of Briggs’ classmates headed for the Paterson Public Schools headquarters on Delaware Avenue to protest. The students walked a mile and half chanting, “We want a school” on their way to the district’s headquarters.

State-appointed district superintendent Donnie Evans met the students at a conference room to listen to their concerns.

“We demand to be housed at Colt Street,” said Adjalyn Blow, 17, a student. “We demand the education that was promised to us.”

Blow and her classmates feel the conditions at the school can only be improved with a move to another building.

The students suspected the district intends to leave them at the mill building. Some district staff have told parents of Harp Academy students, who raised concerns about the general type of students Yes Academy educates, that the Colt Street building will be solely for the medical arts academy.

One student said the impression that Yes Academy is described as a “house of criminals and thugs” is untrue.

“You are not the students that folk want to say you are. There has been gross misunderstanding of who you are,” said Evans. “We’ve been saying that over and over again.”

Evans said a decision has yet to be made whether or not to move Yes Academy to the Colt Street building. “No one has really decided that you’re not going to be at Colt Street,” said Evans. “No final decision has been made. We’re still waiting until we get the building.”

The district’s website lists the academy’s address as 5 Colt Street. Evans noted that the district is still waiting on getting into the building which is still under construction. The building is expected to open in January 2016.

Evans told the students the move from Smith Street to State Street is temporary. Yes Academy was located at its own building on Smith Street which is now occupied by the district’s all-boys elementary school.

Why’d they have to move us from Smith Street? asked one student. “We were doing good there.” The students though did not receive an answer to this question.

School board member Corey Teague, who arrived at the protest moments after the students were hustled into the conference room, wondered why the district moved Yes Academy from its Smith Street location.

The students also said their building lacks a science lab and a gymnasium. Gym and science are necessary subjects to obtain a high school diploma, said the students. Students usually move to another building for gym, said district officials.

“It feels like you are going around the questions,” said Jasmine Rodriguez, 18, student, to the superintendent. She said Evans was not providing the students with straight answers.

“You all are just playing Russian roulette with our education,” remarked Myzair Suber, 18, another student.

Teague supported the students and their protest for a better facility. Evans and others praised the 60 or so students at their orderly conduct.

Chad Montague, an English teacher at Yes Academy, said the protest is the result of dissatisfaction that has been building for more than a month. One student said school began in September, now it’s October and the students have yet to receive a permanent location.

Evans invited the students to a school board meeting to assist in dispelling the perception that the school houses students who have had run-ins with the law. When asked do some of the students at the school have criminal records, Rodriguez said, “Most of the kids are misjudged.”