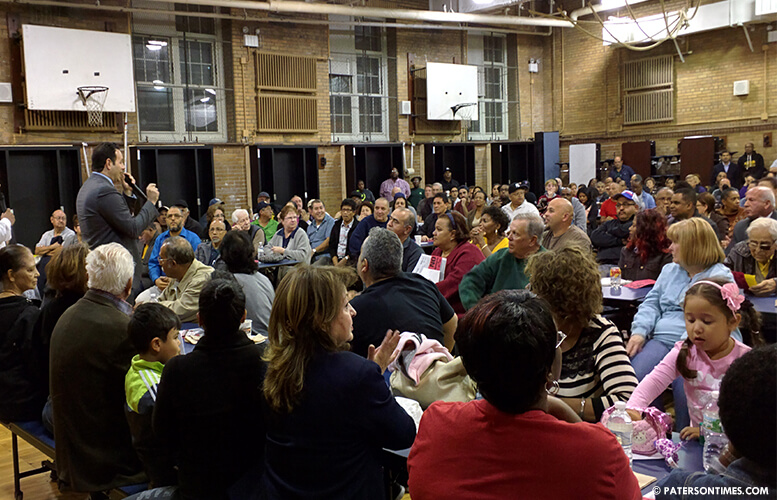 Sayegh, who represents the tax averse 6th Ward, gathered a patchwork of neighborhood groups to oppose the new tax levy which will raise $3 million to replace the existing recreation budget line item.

Goow called for large turnouts to oppose any new taxes. “The only way we’re going to create accountability is by coming together like this,” he said.

The big crowd filled the cafeteria. Many could not find seats inside the packed room. A long line of residents stretched from the reception desk to the playground of the school as Sayegh handed each person a red flyer that read, “Vote NO on the new tax.”

Sayegh warned against the tricky language on the ballot question which makes no mention of a new tax, but refers to the six-cent tax per $100 of assessed value as a levy. “They don’t use the word tax,” he said.

“The mayor wants you to believe it will be very minimal,” said Goow. Having worked with the mayor in Torres past two terms, Goow told the crowd – to great applause – the mayor has a penchant for liberally spending taxpayers’ dollars.

The prevailing opinion among a large number of property owners who attended the forum was that Torres was behind the recent tax increases which resulted from a mixture of a tax rate increase and retroactive application of new assessment values to determine the third and fourth quarter taxes.

Steve Kucuk, a South Paterson property owner, blamed the council. He said the council should scrutinize the mayor’s proposals and avoid approving new tax increases. He even suggested going as far as shutting down city government to send Torres a message.

Most property owners saw discounts in their bills, according to the city’s tax assessor Richard Marra, while others saw large increases.

Torres came into office and expedited the revaluation process which was stuck in limbo under his unpopular predecessor Jeffery Jones in hopes of reducing the tax burden on property owners. The revaluation resulted in reduced assessments for a majority of properties; however, the tax rate change which adjusted the 2.9-percent to 4.108-percent resulted in a tax hike for any property whose assessed value did not drop 30-percent or more.

Municipal officials had said the city was paying much more in county taxes than any of the 16 Passaic County municipalities because its tax base was overvalued. The city’s tax base shrank from $8.2 billion to $5.75 billion.

Even before the large tax bills went out, Torres began a campaign to increase recreation funding to $5 million by raising an additional $3 million from taxpayers through a ballot initiative. He and his supporters campaigned hard, collected thousands of signatures, and forced the council into approving the proposition for ballot placement.

After the large tax bills were in the hands of property owners, Torres, under heavy pressure from unhappy taxpayers, decided to not add an additional $3 million to the recreation budget, but replace the current $2.5 million budget line item for recreation with the $3 million his recreation tax will bring in.

“It will not help the children even if it passed,” said Kenneth Morris, councilman at-large, who was at the forum, citing the small increase in recreation funds. The recreation funding will go up by a modest $500,000 rather than double as Torres initially promised, according to a failed resolution Torres’ administration submitted to the council on Tuesday for support.

“A lot of people are telling me they can’t pay their taxes,” said pastor Jesus Sevilla, one of the organizers of the forum.

The almost two-dozen attendees interviewed at the forum said they will vote against Torres’ recreation tax on November 3rd, 2015.

“You have to vote no,” urged Sayegh.