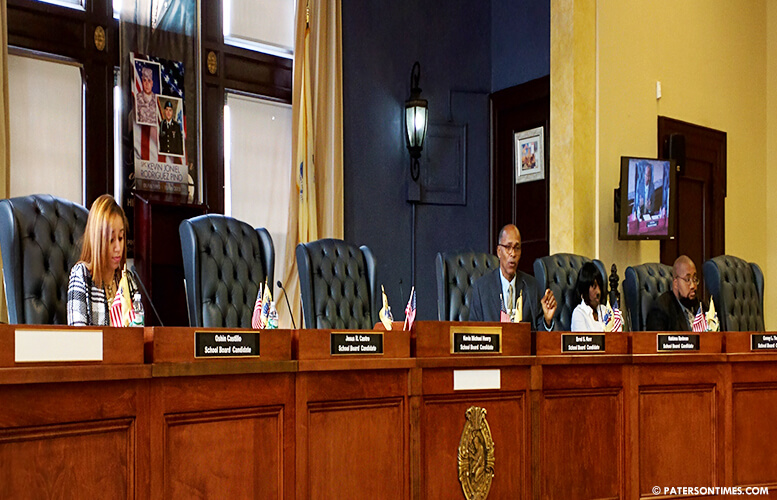 Four out of the six candidates seeking to fill the three available board of education seats discussed the district’s financial woes, state underfunding, consulting contracts, parental engagement, and the success of high school academies.

The candidates gathered at the city council chambers on Thursday afternoon. Challengers Oshin Castillo, Nakima Redmon; and incumbents Corey Teague, Errol Kerr were asked how they would deal with a ballooning budget gap that will leave the district with a $27.5 million deficit at the end of 2016-17.

“We’re due a lot of money,” said Teague. He blamed the district’s financial woes on the state and poor decisions at the district level citing personnel. “The state failed to give us enough funding to operate properly,” he said.

“We have a problem with our revenue stream,” said Kerr. A forensic audit, moratorium on charter school, and hiring freeze on non-instructional staff were some ways Kerr said he would tackle the budget deficit that is expected to turn into a cumulative $186 million shortfall by 2019, according to a district auditor’s forecast. “We should execute a forensic audit and review all existing contracts,” he said.

When the state is underfunding our schools how can our students succeed? said Redmon. “When you look at it when our kids start kindergarten and then they go to high school they will not be able to compete with their international counterparts. They are going to be so far behind because we have to pick and choose who we have to cut.”

“It’s a serious issue that a lot of our parents don’t understand,” said Castillo. We have to educate our community, she said. Many parents look at the half-billion budget and presume it enough to properly educate their children, she said.

Kerr highlighted his opposition to last year’s proposal to raise property taxes to collect more revenue for the district. He noted the city is a recipient of state aid, adding that, it makes little sense to further tax already overburdened homeowners.

“I will not support any form of tax levy for education,” said Kerr.

Castillo said raising taxes will present great difficulty for city families. “We need to focus on the state and a little less on our residents,” she said.

The sole candidate without a clear position on the school levy was Redmon. “I won’t answer at this time,” she said.

Redmon said the district and the city need to revamp their shared service agreement to better serve young peoples’ recreation needs. She was also uncertain whether the district’s dismantling of large schools at John F. Kennedy and Eastside High Schools were producing results.

“I think the switch to academy has helped a lot of our children,” said Castillo.

“The comprehensive school model did not work well for Paterson,” said Kerr. He said violence has declined as a result of the academies. The students are more docile and more inclined to do work, he said.

“We have seen some positive results,” said Kerr. “It has worked. We just hope it will continue.”

Teague suggested the successes of the academies are debatable. “There’s a lot of issues with that. I’m on the fence whether or not there’s a difference now and how it was,” he said. “I’m not a big supporter of the academics.”

The challengers were asked about an independent academy – Harp Academy — that’s been the subject of controversy lately over a failed move.

The candidate weighed in on the move that did not materialize on time leaving the students without school supplies or books. “Right now they are at a disadvantage,” said Redmon. She also said the Colt Street building is “unsafe” for children due to the complex fire escape.

Castillo said the district is “endangering” the education of Harp Academy students. “They don’t have the tools they need because they were rushed,” she said.

Harp Academy is among three-percent of academically exceptional schools in New Jersey, according to the New Jersey Department of Education.

Castillo suggested the district is dismantling a good school.

Castillo and Redmon were both asked what things they will do to engage parents that has never been done.

Redmon said the district should create after school programs where both students and parents learn about the curriculum. She said this will assist parents in better understanding what is expected of their children.

Castillo said she’d like to see forums to inform parents about what is occurring in the district. She also suggested engaging young parents, who went through city schools.

When asked what they will do to implement new policies to improve quality of education at city schools, the two incumbents said more accountability from high ranking district officials.

Teague said too many top level administrators are slacking on their job. He suggested removing ineffective directors.

Redmon said she wants to see community forums to collect opinions from parents. Castillo concurred with both Kerr and Teague.

The candidates were also asked about the large number of consulting contracts the district has been awarding and which ones have produce results and which have not.

Kerr identified the $1.6 million contract with the University of Pittsburgh’s Institute For Learning (IFL) for staff training. “We could not see the gains for it,” said Kerr.

Kerr said the superintendent has the last word on the consulting contracts.

“When you don’t have governance, you as a governing board, you can’t decide what contracts that come in as a consultant,” said Redmon. She said the district should work on getting governance.

“I haven’t seen the benefits of any of those contracts,” said Teague. He said nepotism, and political favoritism are involved in awarding contracts.

The 90-minute forum was moderated by Kenneth Morris, councilman at-large, to provide city voters a chance to gauge the candidates’ positions on various education issues before the November 3rd, 2015 election.

Voters will select three of the six candidates running for the school board for three-year terms.
Kevin Michael Henry did not attend the forum; Jesus Castro submitted a letter explaining a schedule conflict that prevented him from attending.