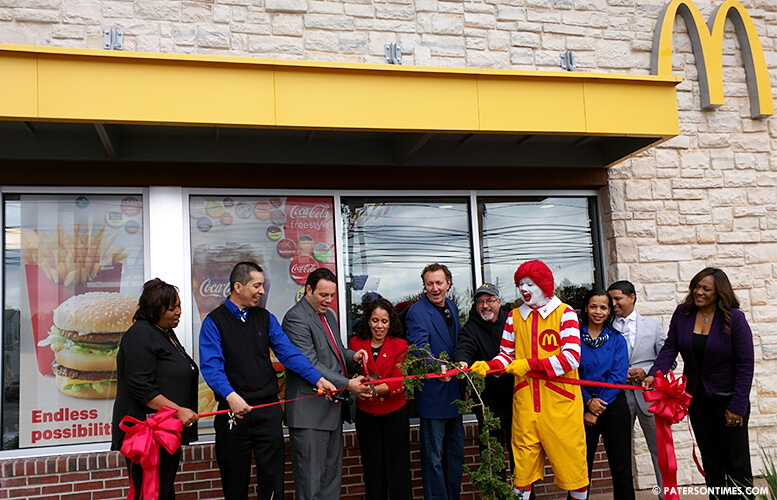 The McDonald’s restaurant on Crooks Avenue celebrated its revamped exterior and interior with a ribbon cutting ceremony on Saturday morning.

A brand new lobby, resurfaced parking lot, and a double drive-thru were just few of the things to come out of the 11-week renovation, said Angela Adderley, owner of the restaurant.

“It’s been a labor of love,” said Adderley. The revamped location projects a clean and crisp image for the restaurant in the Lakeview section.

The renovation included the gutting of the entire lobby to create an artsy new space that was filled with customers on Saturday morning. The establishment also completed new landscaping and repaved its parking space outside.

“Our customers are coming back,” said Adderley.

Those customers will also notice a double drive-thru and a new look at the restaurant which was part of the 11-week renovation project that began in the second week of August, said Adderley. Renovations like that usually takes six-to-eight weeks, but this one took 10-11 weeks due city permit delays.

The owner shied away from sharing the cost of the renovation. A typical McDonald’s renovation project costs upwards of $400,000, she noted. The building that was renovated was relatively new, said the councilman.

Adderley said the location has been on that spot for about 17 years. Sayegh said he’s a customer at the establishment. The councilman was pleased with 24-hour breakfast offerings at the Crooks Avenue establishment.

Adderley took over the location about a year ago. She said the established has 55 employees. “They’re all from Paterson,” she said.

A neighbor, Sandy Mac, visited the grand re-opening of the restaurant. She appeared pleased at the appearance of the place.

“They are always out there cleaning their sidewalks,” said Mac, a city resident. Sayegh recalled the establishment under a previous owner who allowed an unkempt environment to take root at the spot.

“This McDonald’s is committed to quality of life in the neighborhood,” said Sayegh. He said there were several complaints from residents about the restaurant doing a shoddy job keeping its sidewalk clean and having rowdy crowds. However, that has changed under Adderley’s watch.

Adderley has been with McDonald’s for 21 years. She began with a location in Plainfield. Joining the world’s largest chain of fast food restaurants was an improbable move for Adderley as she was looking to use her severance pay from an IBM job she landed after graduating from Florida A&M University to open a business. She looked at McDonald’s, but it had a very expensive price tag. She looked at other franchises like Subway, but an incentive program, no longer available, helped her become a McDonald’s franchisee.

Adderley grew up in modest circumstances with four sisters and a brother in Florida. Her 3,000 square feet restaurant located at 265 Crooks Avenue attracts more customers than a typical McDonald’s being strategically located on the border of Paterson and Clifton.

“We’re proud you made the investment in Paterson,” said Sayegh.

“We did it all for Paterson,” said Adderley.