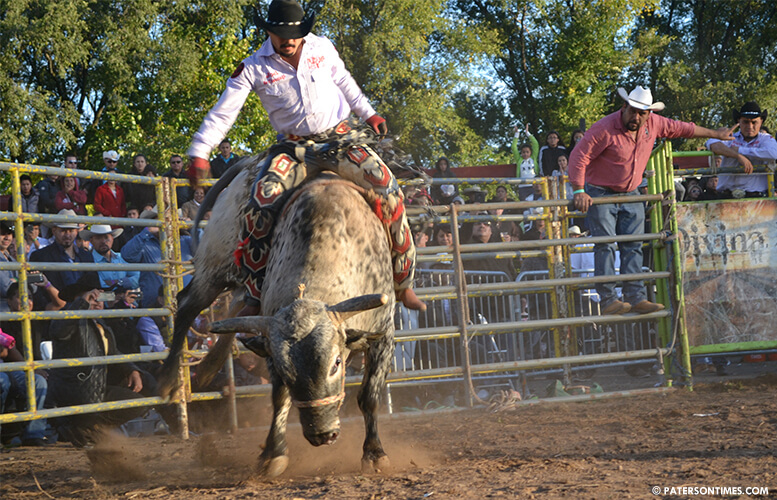 Inside the stall men agitated the bull, a fighter quickly jumped on top of the animal, and the gate opened to the cheers of hundreds who flocked from far and wide to see the Mexican rodeo at Hinchliffe Stadium on Sunday afternoon.

“It’s pretty awesome,” said Brenda Daiz, 30, who attended the rodeo with her Mexican husband and 4-year-old. Daiz is originally from El Salvador. She said this was the first rodeo event she attended.

For her the event was of cultural significance to have her child learn about the Mexican culture. “The boys are brave to get on the bulls,” said Vanessa Avila, 11, who attended the event with her mother and father.

Avila sat in the first row of chairs, as close as one can get to the ring, but was unafraid even when the bulls collide to the railing of the makeshift ring. The fifth grader from Brooklyn said she witnessed four other rodeos.

The event put on by Mexican Folklore Dance Society turned half of the stadium into a rodeo arena. The organizers created a dirt rodeo ring in the center of the stadium with large bleachers and chairs circling the makeshift bull riding arena.

In between the bull releases with a riders struggling to remain on top of the unstrung animal, rodeo clowns took over. At one point three men from the audience were separately allowed inside the ring to dance with an androgynous clown — a man dressed as a woman — who got the best of two of them, but the third vigorously spanked the clown into his place at the roar of the audience.

1,500 people including children – who were admitted for free – came out for the event, according to organizers. The event featured few dozen vendors who sold food at the stadium. Some walked about the crowd peddling cotton candy, chips, and other snack items after the rodeo commenced.

This may be the first time in its history the Hinchliffe Stadium hosted a Mexican rodeo, said Alex Garcia, organizer of the event. He said the group was expected to host the event during the Great Falls Festival earlier in the year, but the show did not materialize.

Garcia said instead the rodeo was turned into a separate event. Ringside tickets to the event were $40 while bleacher tickets went for $20, said Garcia. Miguel Guzman, founder of the Mexican Folklore Dance Society, said the group has been putting on rodeos for 22 years in various parts of the country including New Haven, Connecticut; Cincinnati, Ohio; Frederick, Maryland; and Cranbury, New Jersey, among other places.

Garcia was a bit surprised the stadium was abandoned for so long. He thought it’s a perfect place for concerts, racing, and other sporting events. Sunday afternoon’s event attracted a large out-of-town crowd serving as a sort of demonstration of what’s possible at the stadium which has been in disrepair for about 20 years.

Avila, the fifth grader from Brooklyn, said she has witnessed gore at another rodeo she attended, but Sunday’s event was bloodless.