School 29 in Paterson gets a new playground | Paterson Times 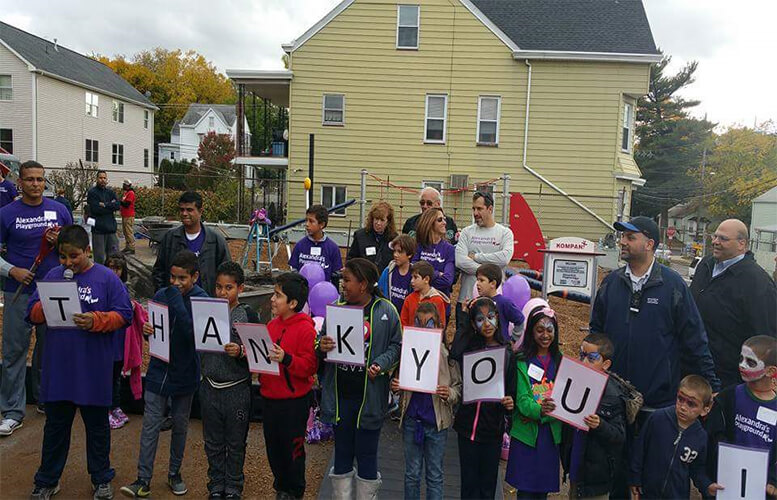 Young people in the city’s Stony Road section got a new playground on Saturday that includes a supernova, a slide, a UFO trail, and a climbing wall.

More than 200 volunteers descended on the Danforth Avenue school to make the playground possible. Volunteers included students of School 29 and their parents as well as other community residents.

“More kids participated in this playground than any other in the past,” said Eddie Gonzalez, director of outreach for the New Jersey Community Development Corporation (NJCDC). “Which is good buy in for the community.”

Gonzalez said community buy-in ensures the playground remains in good shape over the years. He said when community members put in work on a playground they are more likely to maintain it.

“It’s was an amazing transformation,” said Tricia Heywood, executive director of Alexandra’s Playground. The school’s playground was no more than a concrete surface prior to Saturday afternoon’s work.

Alexandra’s Playground, a New York-based nonprofit, purchased the equipment for the playground and conducted the installation, said Heywood. NJCDC completed the site preparation and the needed excavation.

The playground cost approximately $58,000, according to the organizers. Heywood’s organization took on $50,000 of the expenses while the NJCDC expended $8,000.

NJCDC has been building playgrounds throughout the Silk City. It has so far built eight playgrounds, said Gonzalez.

Heywood said the project was much bigger than a playground. She said a new basketball post was put in as well as hoops. She said the foundation of a community garden has been setup next door to the school.

Planting boxes have been installed that will be utilized in the spring, said Gonzalez.

“This playground will enhance our students’ experience and provide the community with a safe place where they can take their children to play,” said Jorge Ventura, principal of School 29. “We want our school to be a community school where stakeholders feel like we are here to provide resources and serve our purpose toward improving the quality of life for everyone that surrounds us!”