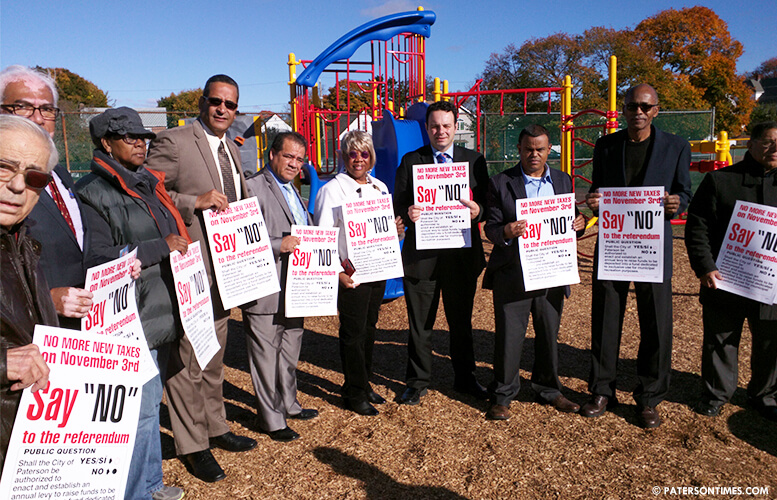 A dozen staunch opponents of mayor Jose “Joey” Torres’ recreation tax assembled in front of a recently built playground in School 25 to remind voters to cast their ballots against the proposed $3 million recreation levy.

“We built this playground without any taxpayer dollars,” pointed out Andre Sayegh, 6th Ward councilman, who spent the morning knocking on doors, handing out red flyers that urge voters to come out against Torres’ recreation tax.

The mayor’s proposal will charge property owners 6¢ per $100 of assessment. The levy amounts to a $115 tax increase for an average property assessed at $192,000.

Kerr and others are not against recreation. In fact, Kerr and Sayegh expressed great support for recreation; however, they oppose taxing overburdened property owners, who see increases in their tax bills every year, to support recreation.

The councilman cited his initiative to build a fully loaded playground at School 25.

“We’re firmly against the recreation tax levy. We believe the monies can be obtained in other ways,” said Lynda Gallashaw, who ran an abortive campaign to capture a state senate seat in 2013. “It is unfair for the administration to put this additional burden on the taxpayers of Paterson.”

The organizers cited grants and corporate donations to fund recreation. “The mayor, he can find donations,” said pastor Jesus Sevilla. He said the city has a high unemployment rate which can be leveraged to gather volunteers.

“As a property owner the tax is crazy,” he said. Some property owners saw their taxes skyrocket in the third and fourth quarter leading to mass demonstrations at city hall meetings. Many blame Torres for the increases that resulted from a combination of a higher tax rate and retroactive application of new property assessments.

“The mayor seems to be tone deaf to the pleas of taxpayers,” said Sayegh. “In fact, I’ve heard it said he’s out of touch probably because he’s been out of town.” Torres was criticized for being out of the city when the tax bills went out resulting an outcry.

Torres could not immediately reached for comments on Friday afternoon.

“A lot of members at my church want to give away their deeds because they are not able to pay the taxes,” said the pastor.

The dozen opponents of the mayor’s recreation tax stood in front of the playground built using non-government funds to say recreation is possible without additional taxation. 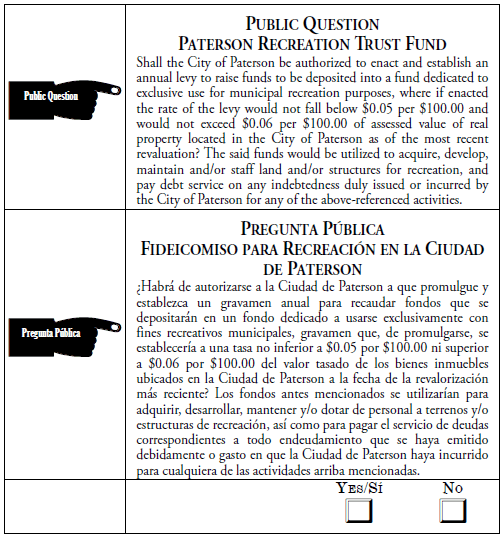 The recreation tax question as it actually appears on the ballot.

Sayegh said the placement will likely ensure the measure is soundly defeated by voters. He pointed out the word tax is missing on the ballot rather levy is used.

“We depend on an intelligent voter just a couple of days from today to vote no on this question,” said Tom Fuscaldo, a city taxpayer. “Will the intelligent voters please come out and vote no.”