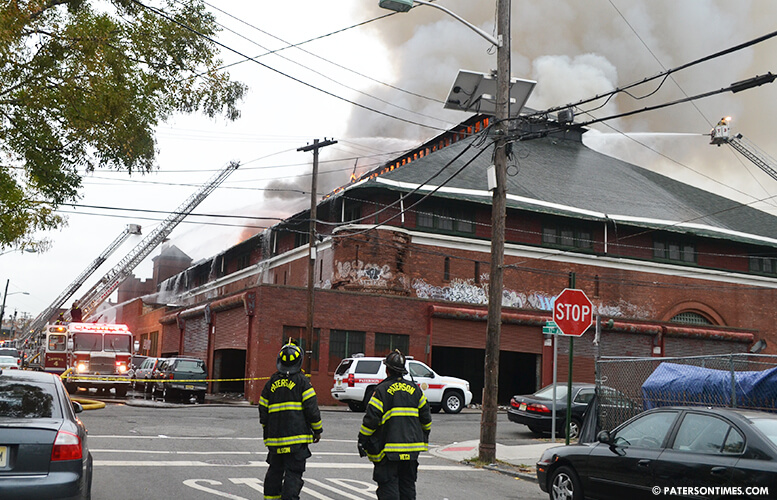 Plumes of smoke billowing out of the Paterson Armory could be seen over the downtown sky as more than a dozen fire engines continued to struggle to bring a seven-alarm fire at the more than century old building under control.

Fire chief Michael Postorino said the fire began in the basement of the armory and was reported at about 11 p.m. on Monday. He said fire engines rushed to the single alarm fire which quickly turned into a two, three, four, five, six, and as of Tuesday morning a seven-alarm blaze.

Initially the firemen were battling the fire inside the building, but as heat and danger increased they were forced out. “We tried to make an interior attack,” said the chief. “Things started collapsing around us, lot of heavy fire, so we had to pull the guys out for safety.”

Firefighters brought the blaze under control on Tuesday evening after a 20-hour struggle.

Officials said the building will be partially demolished.

16 fire engines – many from surrounding communities — were on the scene at about 8 a.m. on Tuesday spraying water over the visible flames at armory which was built in 1894 to house New Jersey’s Second Regiment.

It’s not clear what started the fire at the massive three-story 54,000 square feet building. The building at first burned on the inside, largely invisible to those gawking at the rushing smoke from their porch or the sidewalk, but after burning for more than nine hours the flames of the conflagration no longer remained invisible.

The armory takes up a block surrounded by Market Street, Rosa Parks Boulevard, 17th Avenue, and Pennington Street. The amount of damage to the once treasured building appears extensive. It remains to be seen if the city owned building has to be demolished.

“We have no idea what kind of damage the building is going to sustain once the fire is out,” said Postorino.

Five schools near the armory have been closed today as a result of the fire. Despite this morning’s announcement, a number of youngsters with backpacks were outside the entrance of Eastside High School, intently watching the flames engulfing the building.

Successive mayors have intended to make use of the armory either by renovating it or selling to a private developer; however, those plans never materialized.

An artistic rendering of a renovated Paterson Armory.

The Paterson Parking Authority few years ago unveiled a plan for the derelict armory which was last used in the early 1980s. The authority would renovate the building for a multi-use sports complex with swimming pool, bowling alley, basketball and volleyball courts, indoor soccer field, running track, according to city documents.

In late 2012, city leaders created a nonprofit organization called the Paterson Armory Development Corporation, whose sole purpose was to rehabilitate the armory.

Just last year, the city council awarded a contract to a Midland Park-based firm to clean-up the asbestos inside the building.