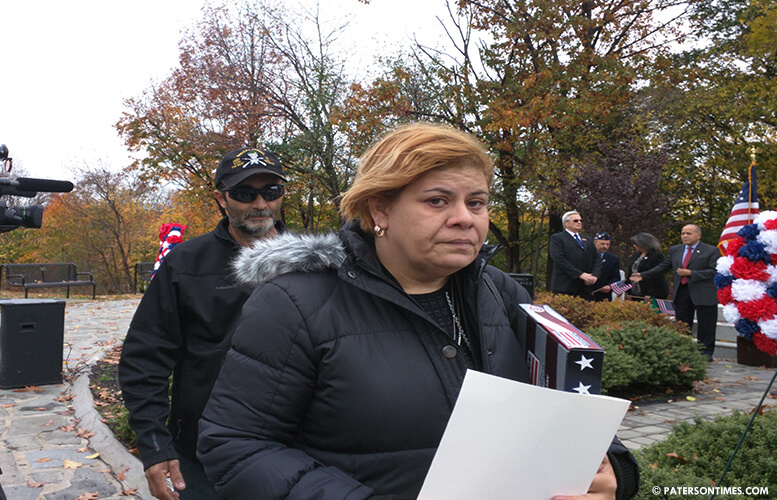 After the mayor pulled off the cover to unveil a monument to private first class Kevin Rodriguez, who was killed in a training exercise at Fort Campbell last month, his family members, who gathered around, saw the slain soldier’s face on the stone and began to weep.

Daniel Rodriguez, the grief stricken father, knelt near the monument and grasped with his finger each of the letters that spelled “Fallen Hero.” His son has joined the many Patersonians who gave their lives for the United States and are forever memorialized at the Hayden Heights War Memorial on McBride Avenue.

Madeline Rodriguez, the aunt, emitted a great cry of sorrow. Mayor Jose “Joey” Torres and others comforted the family.

Torres embraced the aunt, who was in tears, providing an iota of solace. “We remember this young man for his heroism, patriotism, and commitment to serve his country,” he said.

Rep. Bill Pascrell vowed to find out what led to Rodriguez’s death. “I made a commitment to you and I will keep that commitment,” he said. “We’ll know exactly what happened.”

Rodriguez, a 101st Airborne Division soldier, was fatally shot during a training exercise at Fort Campbell in Kentucky on October 6th, 2015. He was 22 years old. His mother Joan Pino (pictured front with Rodriguez’s father behind) and Jane Gonzalo attended the ceremony.

Mike Pocius of Little Falls who lost a leg in Iraq was also honored at the ceremony. A plaque was made to honor his sacrifice. He did not attend to receive it — Tony Vancheri, president of the Paterson Veterans Council, said he will ensure Pocius receives the plaque.

A deceased veteran Eric M. Graupe who expended great energies and efforts to ensure veterans were not trampled upon after serving their country was also honored at the ceremony with a stone re-dedication near the entrance of the war memorial.

“We honor his memory and he will never be forgotten,” said Torres of Rodriguez.