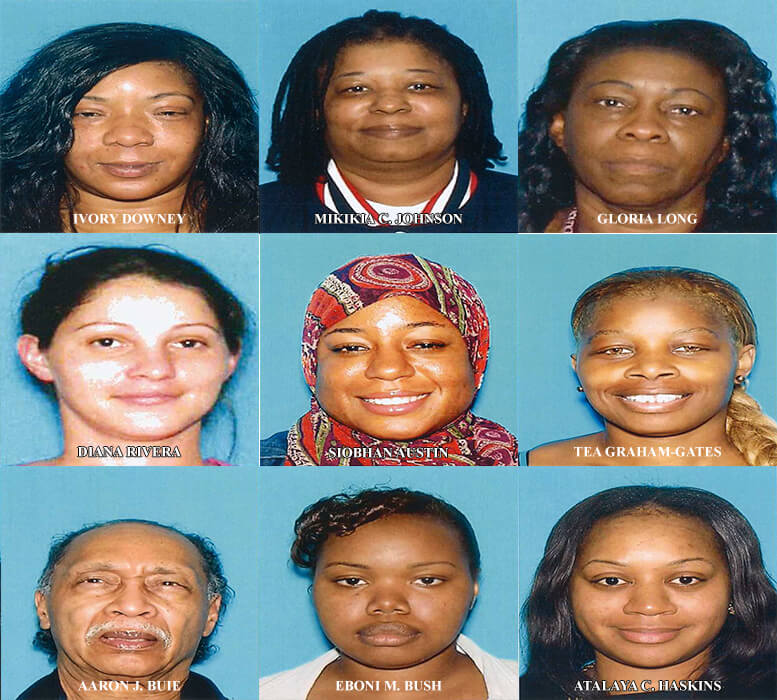 Nine former and current U.S. Postal Service employees have been indicted for allegedly obtaining unemployment insurance by misrepresenting their employment status, according to the New Jersey Attorney General’s Office.

Ivory Downey, 41, of East Orange; Mikikia C. Johnson, 40, of Jersey City; Gloria Long, 64, of Jersey City; Siobhan Austin, 40, of Irvington; Tea Graham-Gates, 45, of Jersey City; Aaron J. Buie, 71, of Piscataway; Eboni M. Bush, 35, of Plainfield; Atalaya C. Haskins, 26, of Newark were indicted in the past month for taking nearly $50,000 in benefits they were not entitled to, according to authorities.

Each of the individuals collected amounts ranging from $2,000 to almost $9,000. Each could face three to five years in state prison and up to $15,000 in fine upon conviction, authorities said.

The eight women and one man were charged with third-degree theft by deception. The New Jersey Division of Criminal Justice Specialized Crimes Bureau obtained nine separate grand jury indictment over the past 30 days against the individuals.

From 2010 through 2015 the indicted individuals received $49,564 in fraudulent unemployment benefits, authorities said.

“These defendants stole thousands of dollars in benefits by falsely certifying, week after week, that they were either unemployed or not earning anything close to what they actually made working for the U.S. Postal Service,” said Director Elie Honig of the Division of Criminal Justice.  “It’s not like they lied just once; they allegedly repeated their fraud over and over again to keep the stolen benefits flowing.”

Rivera for instance filed fraudulent unemployment claims for 10 consecutive weeks between March 10 and May 18, 2012. She collected $6,792 in benefits while working as a carrier assistant at the Elmwood Park Post Office.

“Unemployment insurance provides a financial safety net for New Jersey workers when they fall on hard times, and we won’t tolerate selfish criminals who lie about their employment status and steal from this critical fund,” Acting Attorney General John Hoffman said.  “By aggressively prosecuting these defendants, we send a strong deterrent message to make others think twice about filing false claims.”