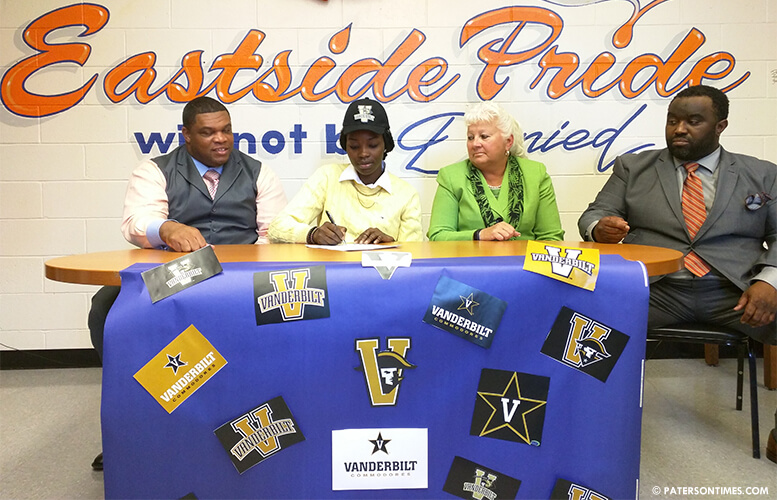 Eastside High School senior Blessing Ejiofor made the tough decision – with about 20 exceptional universities pursuing her – to sign with Vanderbilt University.

Described by ESPN player evaluations as an athlete with “off-the-charts potential,” Ejiofor plans to study pharmacology at the Nashville-based school while playing for the Commodores.

Ejiofor received offers from Duke, Louisiana State, Syracuse, St. John’s, Fordham, Rice, and Rutgers University to name a few. “Getting all of these offers just shows how hard she worked to get to where she is,” said coach Ray Lyde (pictured, far right).

Ejiofor (pictured, with hat) sat between principals Karen Johnson and Zatiti Moody (pictured, far left) basking in the warmth of many praises from school officials during Monday’s signing ceremony at Eastside High School.

The praise came after a great deal of hard work.

Ejiofor spent many long hours practicing since she enrolled into Eastside High School in 2014 as a sophomore after emigrating from Nigeria.

“You could see the potential she had when she came here,” said Lyde. That potential was developed by coaches at the high school.

Ejiofor credited coach Donald Davis for firmly believing in her. “He was like a father to be,” she said. Her height, 6’5, also helped. She also took great inspiration from a famous Eastside High School alumni currently playing in the WNBA.

Ejiofor participated in two basketball clinics put on by Essence Carson of the New York Liberty. “I want to be like her,” she said. “She’s my role model.”

Ejiofor speaks fluent English. She said Nigerian school instruction are administered in English. She also speaks Igbo, one of the four commonly spoken languages in the West African nation.

The 17-year-old senior also had to keep up her grades. She said her current grade-point-average is 3.7.

“Academically she’s sound,” said Johnson, principal at the School of Culinary Arts, Hospitality and Tourism at Eastside High School. She mentioned the difficulty a student endures in maintaining high standards on the court and in the classrooms. “One is sacrificed in some cases,” she said.

Not in Ejiofor’s case.

Ejiofor, a center forward, had to focus not just on her grades and sport, but also on her family back home. She has two brothers and five sisters in Nigeria. She keeps in touch with her family with daily phone calls.

Ejiofor recalls spending her first Christmas in the city without her family. “When I got here it was really hard for me,” she recollected. Homesick she cried during practice. It took her sometime to get accustomed to living away from her parents and siblings.

In Paterson she lives about five blocks from the Park Avenue high school with a relative who she fondly describes as her sister. This sister works as a special education teacher at Eastside High School.

“When I got here I knew I had to do what I had to do to make my family proud,” said Ejiofor. “I had a responsibility to work hard and get better every day.”

It’s evident that she has made both of her families proud: her biological family and her Ghost family.

Ejiofor, a student at the School of Government and Public Administration, carefully decided between her final two picks, University of Miami and Vanderbilt University. She was scheduled to sign on Friday afternoon, but the signing was cancelled because she needed additional time to review University of Miami’s offer which came in minutes before the signing ceremony.

“In two years we’ve signed six students with full scholarships. Vanderbilt is one of the top schools in the country,” said Moody, principal at Eastside High School.

Moody said Ejiofor is among the top 20 sought after players in the country. She’s also academically within the top 20 in her senior class, said Johnson (pictured, second from right).

The high school expects to send two or three more students on full scholarships to the colleges of their choice, said school officials.