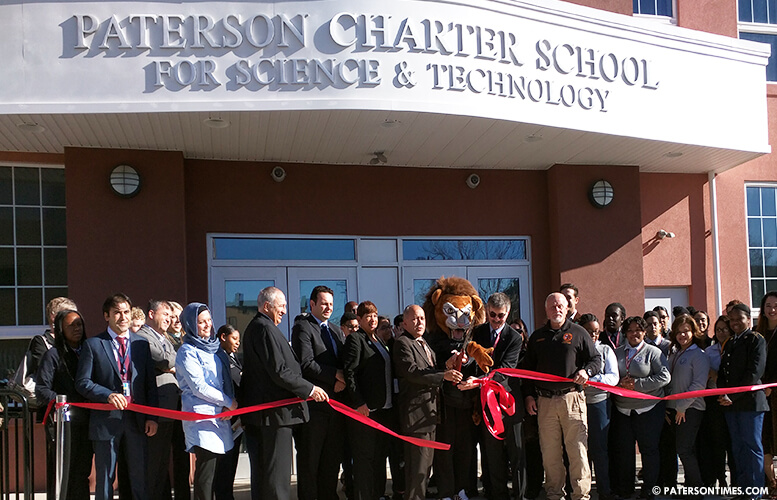 An old abandoned building in South Paterson has been renovated and transformed into a center for learning where the Paterson Charter School for Science and Technology is educating more than 500 city students.

Renovated space in the corner of West Railway and Gould Avenues contains 32 classrooms, said Riza Gurcanli, lead person or principal at the school. It includes upgraded science and computer labs and music and arts classrooms, according to the school.

The building, which has heating and air conditioning in all classrooms, also has a large gymnasium which was recently finished, said the principal. “We were able to move into this building last September, but our building was not ready at that time,” he said. “We waited to get the gymnasium completed before celebrating.”

The building, 196 West Railway Avenue, in July 2012, before the renovation.

Students were going elsewhere for gym, said the principal. Gurcanli said the school houses the charter’s 7-12 grades. He said 504 students and 100 staff members call the building their home every school day.

“Search for a permanent facility led us to this building,” said Gurcanli. The school has had a tough time finding buildings in a densely populated city. He pointed out that after the school was given a charter by the New Jersey Department of Education in 2001 – first charter in the city – it had to wait an entire year before opening because it was not able to find a spot to locate the new school focusing on science and technology education.

“It’s an excellent school,” said Savage. She praised the school staff for being responsive and attentive to parent and student needs. A phone call or an email from a concerned parent is returned within the same day, she said.

City officials praised the school for playing an important role in renovating a building which less than three years ago had many broken windows, ubiquitous graffiti on all sides, and unsafe and damaged sidewalks.

“Building on one of Paterson’s historical industrial sites is a perfect example of how we can transform our neighborhoods and our city by redeveloping and investing in our communities’ starting with schools,” said mayor Jose “Joey” Torres.

Torres lauded the school for giving parents a choice between charter and public schools.

“This was once an eyesore and now it has helped beautify the neighborhood, raised property values, and encouraged investment,” said Andre Sayegh, 6th Ward councilman, who represents the area where the school is located.

Sayegh gestured in the direction of a nearby building where construction workers were painting and installing windows. He attributed redevelopment of the nearby building to the charter’s renovation.

School officials said the $12.5 million renovation was undertaken by Railway Avenue Properties LLC, which owns the building, and was completed in about two years.