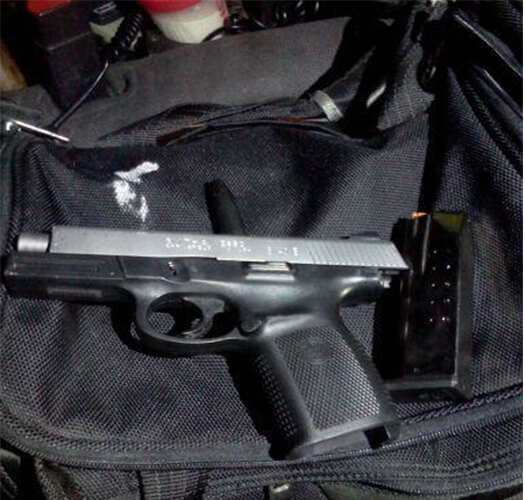 A veteran city police officer sustained injuries and was hospitalized while stopping four suspicious individuals – equipped with weapon – at a Park Avenue cellphone store on Wednesday afternoon, according to police.

Police officer Jaime Mejia, a 30-year veteran, cornered four males inside the Boost Mobile store located at 512 Park Avenue at about 5 p.m., when one of the suspects rushed the doorway, said police director Jerry Speziale.

Mejia’s head struck the metal door-frame as a result. He suffered deep laceration to the head and was transported to St. Joseph’s Regional Medical Center.

Mejia called backup and contained the scene and three of the suspects were arrested while the fourth evaded police after chase.

Numerous units responded to the scene.

“Officer Mejia faced an extremely difficult situation, yet he remained calm and continued regardless of the danger he faced,” said Speziale. “Officer Mejia’s actions and bravery are exemplary.”

Wright, who rushed the doorway, allegedly discarded a handgun inside the store upon sight of Mejia, who responded to the call of four suspicious males inside the store. 100 glassines of heroin was also recovered from Wright, according to police.

Wright was charged with weapon and drug possession, aggravated assault on a police officer and weapon with criminal record, and resisting arrest, said the director.

A loaded .45 caliber handgun allegedly dropped by Wright was found near a showcase in the store, according to police.

The teenager and Thompson were charged with obstructing governmental function, said the director. Both are being interviewed by detectives as the investigation continues.

Police chased the fourth suspect, but he managed to escape.

Wright was previous arrested on gun charges on October 17th, 2015. Just yesterday, he was charged with having in possession 50 grams of marijuana in Butler, according to police.

The director said police continue to investigate the incident.

“Officer Mejia has served the department for three decades and he’s of the highest caliber and we pray for his speedy recovery,” said Speziale.